Funeral services for Walter W. Karsjens, 90, of Hollandale will be at 1:30 p.m. Thursday at the Bayview/Freeborn Funeral Home chapel. The Revs. Roger Davies and Jim Barnhart will officiate. Interment will be in Hollandale Cemetery with military honors accorded by the American Legion and VFW honor guard. Visitation will be one hour prior to the service at Bayview. Online condolences are welcome at www.bayviewfuneral.com. 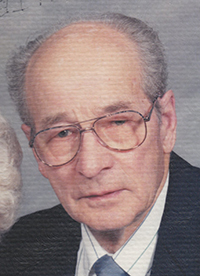 Walter Karsjens was born Sept. 3, 1924, at Bradford, Iowa, to Rient and Mary (Echoff) Karsjens. The family moved to Hollandale in 1926. Walter attended school at Bell School through all eight grades. In 1945 Walter joined the Navy and served his country in the South Pacific. He was honorably discharged June 23, 1946.

Walter and Eva (Vande Kamp) were married at Reformed Church in Hollandale March 5, 1948. They were blessed with three children, Janice, Tom and Al.

In March 1949 Walter and Eva accepted Jesus Christ into their lives and followed the Lord in adult baptism. They became members of Congregational Church in Hollandale. Walter was very faithful as a trustee, deacon and many other jobs and projects for the church.

After World War II, Walter was employed as a cabinet maker at Atkins Trailer Factory in Maple Island. From 1953 to 1954 Walter went to Greenland with North Atlantic Construction, building an Army base. He worked at Wilson & Co. in Albert Lea until 1959. Walter built his family’s home and also their lake home near Remer. He enjoyed fishing, hunting and driving through the beautiful north woods and lake country. Walter and Eva traveled all over, visiting every U.S. state and every Canadian province. They especially enjoyed exploring Alaska. Walter liked coffee time with friends both around here and up north.

In 1960 Walter and Eva asked the Lord for the wisdom and strength to go into business for themselves. He started Karsjens Brothers Inc. with his brother, Dwight. With lots of hard work and determination it became a very successful business. They sold it and retired in 1979. Walter was a loving husband for 65 years and Eva’s best friend. He was a great dad and grandpa, always thinking of his family first and remembering them in prayer.

Eva’s family was always a special part of his life. They will always remember and love him.