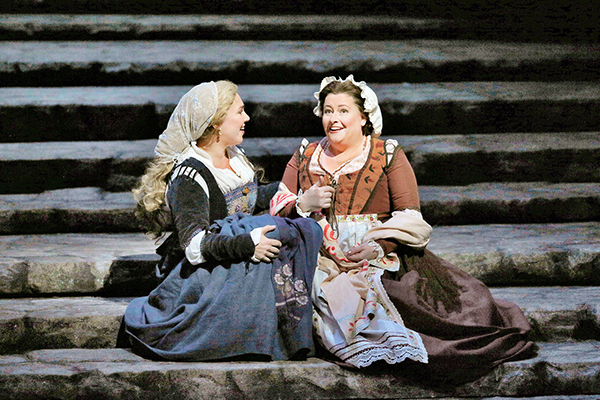 Richard Wagner’s grand opera “Die Meistersinger von Nürnberg” (“The Mastersinger from Nuremburg”) is his only comic opera. It is rich in melody and takes as its subject the joyful art of songwriting itself, and the battle between tradition and novelty. 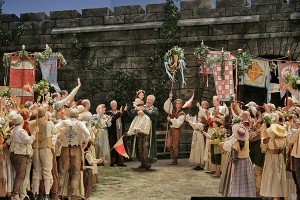 The opera is set on Midsummer’s eve in Nuremberg in the 16th century. The story revolves around the real-life cobbler-poet Hans Sachs and the guild of mastersingers — poets and musicians who pursue their craft according to traditions and rules.

A goldsmith’s daughter, Eva, and a knight, Walther von Stolzing, fall in love, but Eva’s father has promised her to the winner in the forthcoming song contest. Walther must learn the mastersinger’s art rapidly, under the wise tuition of Sachs (a cobbler and mastersinger) and despite a challenge from the foolish town clerk Beckmesser.

Renee Fleming is the Live in HD host this week. The opera will be sung in German with English subtitles.

Please note that this opera begins at 11 a.m., not 11:55 a.m. The approximate run time is six hours with two intermissions.

Tickets are $20 for adults and $12 for students. There are a limited number of free student tickets available, courtesy of the Robert and Margaret Meyers family. Please show your student ID.

“Meet the Met” will meet at 12:15 Friday in the lobby at the Marion Ross Performing Arts Center.  Discussion about the opera, the synopsis and the singers will be the topics.  A shortened version will be at 10:30 a.m. in the Green Room prior to the opera on Saturday.

• A holiday bazaar and cookie walk will be from 8 a.m. to noon at First Presbyterian Church, 308 Water St. Admission to the bazaar is free and the cookie walk is $20. Tickets are available at the church office.

• The Orange Mighty Trio will give a concert at 7:30 p.m. at the Lighthouse Theatre and Event Center, 621 Marshall St. Tickets are $15 in advance and $20 at the door, and can be bought at Marshall Street Music, Hy-Vee, Stadheim Jewelers and the Albert Lea Convention & Visitors Bureau.

• Enjoy Sunday breakfast from 8 a.m. to 12:30 p.m. at the Albert Lea American Legion Club, 142 N. Broadway. Pancakes, sausages, potatoes, scrambled eggs with or without ham, fruit cups, juice, milk and coffee will be served. Cost is $7.

• There will be a candy cane hunt at 1 p.m. at the Freeborn County Fairgrounds Fairlane Building.

• The Harmony Junction Barbershop Chorus teams up with the Albert Lea Community Band to put on a Christmas concert from 3 to 4 p.m. at United Methodist Church, 702 U.S. Highway 69 S, and then again at 7 p.m. at St. Theodore Catholic Church, 315 E. Clark St. An offering will be taken, and all proceeds will go to the Ecumenical Food Shelf and Salvation Army Food Shelf.