Funeral services for Adelbert “Del” Harris of Albert Lea will be held at 10 a.m. on Saturday at the United Methodist Church of Albert Lea. The Rev. Tom Biatek will officiate. Interment will be in Graceland 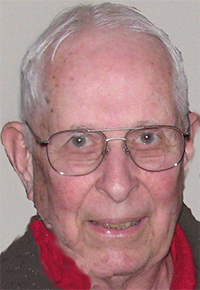 Cemetery. Visitation will be from 5 to 7 p.m. on Friday at Bonnerup Funeral Service and one hour before the service at the church.

Adelbert A. Harris (Del) of Albert Lea was born on March 6, 1920, in Ypsilanti, Michigan, the son of Almer G. and Amy A. (Harris) Harris. He lived on the farm and attended Roosevelt High School in Ypsilanti.

Del married his high school sweetheart, Edwina Lucille Gerould, on July 19, 1938. They moved into the city where they raised three daughters: Mary, Virginia and Joan. Del began his employment and time study work with Central Specialty in Ypsilanti.

In 1958 he was transferred to Queen Products Division/Scotsman Ice Machines of Albert Lea, where he became the director of manufacturing for Scotsman, until his retirement.

During his lifetime he was definitely an athlete, playing basketball, baseball and running track in high school. Later on he actively enjoyed archery, bowling, golf and small game hunting. Of course, he also followed football and he was always a fan of the Detroit Lions, but he did follow the Minnesota Vikings after moving to Albert Lea.

Del enjoyed time spent visiting and helping with some of the projects at the Stettler farms. Trips to Omaha meant going to the zoo, playing golf, visiting the military museum and playing lots of bridge. Time spent in Colorado included trips into the mountains, visiting mining towns and some golf.

On Saturday mornings you would find Del at Hy-Vee having coffee with his friends. He was also a willing helper and friend around his neighborhood. Del was an active member of the United Methodist Church of Albert Lea. He served on various committees over the years and enjoyed ushering in addition to meeting and greeting congregation members.