Funeral services for Corey Olson, 42, of Fairmont will be at 2 p.m. Friday at Bayview/Freeborn Funeral Home. Dr. Kyle Fever will officiate. Visitation will be from 4 to 7 p.m. Thursday at the funeral home and one hour prior to the service at the chapel. Burial will be at Graceland Cemetery. Online condolences are welcome at www.bayviewfuneral.com. 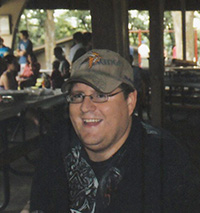 Corey Olson was born Jan. 23, 1973, in Le Center. He was the son of Lewis and Janet (Nelson) Olson. He grew up in Albert Lea and graduated from Albert Lea High School. He briefly attended Riverland Community College. Corey moved to Alden and worked for Larson Manufacturing.

In January of 1999 he was married to Shannon Christensen. He then worked for POET ethanol plant in Glenville. He moved to Fairmont and went to work for Valero, the ethanol plant in Welcome. Corey was interested in computers, model trains, the Minnesota Vikings and most importantly, spending time with his children. Blessed be his memory.

Corey was preceded in death by his mother, Janet; and a son, Hunter, in infancy.