Doris Gordie Herrick Olson, 85, passed away Sunday, Jan. 4, 2015, at Parkview Care Center in Wells with family by her side and in her heart. A memorial service will be at 11 a.m. Wednesday at Grace United Methodist Church in Kiester with visitation one hour prior to the service at the church from 10 to 11 a.m. The Rev. Cherie Daniel will officiate and burial will be private. Please see brussheitner.com to leave online condolences. Bruss-Heitner Funeral Home in Wells is assisting the family. 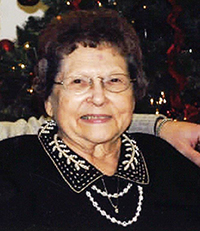 She was born south of Scarville, Iowa, Nov. 8, 1929, to Ole and Ode (Andersen) Johnson. Doris graduated from Scarville and attended business college in Mason City. She was employed by First National Bank in Kiester. She married Forrest (Pete) Herrick July 29, 1951. They lived in Kiester and raised three children. Pete passed away in 1968. Doris married Donald Olson Aug. 14, 1986, and he passed away in 1990.

Doris was employed by Kiester Creamery, Braun’s Home Improvement and finally the Mansfield Store for many enjoyable years. She was city clerk in Kiester for many years and served as church secretary at Grace United Methodist Church as well as Sunday school teacher, youth fellowship adviser and faithful member of circle. Doris was involved in the organization of Bowler’s Leagues in Kiester. She was a leader for Boy Scouts and Girls Scouts, and helped on various committees throughout the community. Visits with her family, extended family and friends — with good food, laughs and conversation — were her greatest joy. She loved and was proud of her children, grandchildren and great-grandchildren. Their accomplishments and stories became hers. Doris was affectionately known as “Grandma Wheelchair” by her great-grandchildren. She was known for her beautiful needlework — especially hardanger and Christmas stockings — which were shared with many. She was proud that she had shared photo Christmas cards of her family every year for 62 years. She enjoyed meeting and visiting with the people at Parkview and she dearly loved many of the staff and residents there. She enjoyed the Minnesota Twins, as well as the sun and its warmth.

Doris was preceded in death by her husbands; her parents; brothers Gordon, George, Roy and Reuben; one sister, Marjorie Rowland; and stepdaughter, Nancy Wetzell.