“Everything is nearly copacetic. My family all chipped in and bought me a new suit. It was nice of them, but it served no purpose. You can dress a pig up in a tuxedo, but it will still oink. I don’t wear a suit unless I’m a pallbearer. Giving me a suit is like telling me, ‘If you ever have a splinter in your finger, call me. I’ll rush right over and push it in farther.’ We had ham for Christmas. I love leftover ham sandwiches. I figure that if you have to cook it once, it should feed you twice. Ma told Pop she didn’t want any expensive gifts this year, so he didn’t buy her any. Boy, talk about a silent night. My great uncle passed away and left me 37 frequent flyer miles. He was the one who tied my old shoes to the newlyweds’ car while I was still wearing them. On Tuesday, I thought I’d lost everything that ever held any meaning for me.” 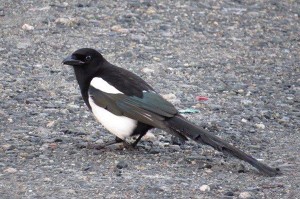 “Did you look behind the sofa cushions?” I say.

“I did. And I found my lost TV remote. Actually, there were five of them. Life is good times five. Happy New Year.”

I like winter shadows. They mean the sun is shining.

A large raptor landed in a tree. It perched and watched for prey on the road. It was a football-shaped hawk, brown above and white below. It had mottled white shoulder patches. If I could have seen its front, it likely would have had a dark belly band. It was a red-tailed hawk.

I watched a red squirrel run and jump from branch to branch in pursuit of a blue jay that it found annoying.

The Christmas Bird Count was disappointing this year. I didn’t see a single partridge in a pear tree.

Jack Moon of Kiester told me that he puts out peanuts in the shell for blue jays. Jack feeds about 10 peanuts at a time and the jays always take the biggest one. I’ve watched a blue jay fly into a feeder and pick up peanut after peanut, looking for the heaviest one. Once it found a heavy peanut in the shell, it grabbed it with its bill and flew off to eat it or cache it for later. Then it returned to take what it deemed to be the heaviest remaining peanut.

My wife and I were in Israel. It was hotter than a dollar store frying pan on the desert. We encountered Bedouins there. The nomadic Bedouins have become experts in desert survival during their long tenure in the desert. I wondered about their expertise as I watched Bedouins wearing black robes while they herded goats. Do black robes help Bedouins minimize heat loads? Research done by Harvard University and Tel Aviv University in 1980 found that a black robe conveys more heat inward than a white robe. The research found that the amount of heat gained by a Bedouin exposed to heat is the same whether wearing a black or white robe. The additional heat absorbed by a black robe was lost before it reached the skin. Bedouins wear their robes loose. Cooling occurs by convection, either through a bellows action, as a robe flowing in the wind, or by a chimney effect of air rising between robe and skin. To Bedouins, black is as cool as any color.

My wife and I were in the part of Canada where in 1999, hunters in Tatshenshini Provincial Park in southern Yukon found the body of a Tlingit that anthropologists believe had been crossing the glacier, while possibly engaged in the grease trade. Radiocarbon dating determined that the body was about 500 years old. Kwaday Dan Sinchi or “Long Ago Man Found” was around 20 when he died, probably from freezing to death. He carried dried fish, a hunting weapon, a medicine bag and was clothed in a traditional coat made from 100 ground squirrel hides.

“Do squirrels sleep in those leafy nests in trees?” Squirrels have thick coats of fur that keep them warm, but pelage isn’t waterproof. Squirrels like nesting in hollow trees or other locations (chimneys, attics, etc.) that offer cozy protection from weather and predators. If there are no suitable cavities available, squirrels build nests of leaves in the forks of large trees. These are well camouflaged by leaves in the summer, but obvious in the winter. The leafy nests clinging to branches are called dreys. The drey is heavily constructed with thickly interwoven twigs for winter use. In the summer, the drey might be a flimsy shelter. Sometimes a crow’s abandoned nest is the base. Twigs, complete with leaves, are woven together to form a bulky outer shell. Inside, layers of leaves are plastered to keep out rain and wind. Squirrels sleep when idle and during bad weather. They often build more than one drey and rotate among them to take advantage of food supply locations and to avoid parasites and predators.

Attila the Hun wore an image of a northern goshawk on his helmet.

Kublai Khan is said to have owned 200 gyrfalcons. The Mongols were keen falconers.

Don’t release balloons at celebrations. We live in a plastic world and we throw a lot of it away. That isn’t good for living things. Please recycle.

The arrow of a weathervane points to the direction the wind is coming from — it faces into the wind.

A National Audubon Society study found 400 active bald eagle nests in the lower 48 states in 1963. A nesting pair reported in Jasper County in 1905 was the last active nest in Iowa until 1977, when one was found in Allamakee County.

“There’s a sunrise and a sunset every single day, and they’re absolutely free. Don’t miss so many of them.” — Jo Walton

“What the caterpillar calls the end of the world, the master calls a butterfly.” — Richard Bach