Freeborn County had 3 traffic fatalities in ’14 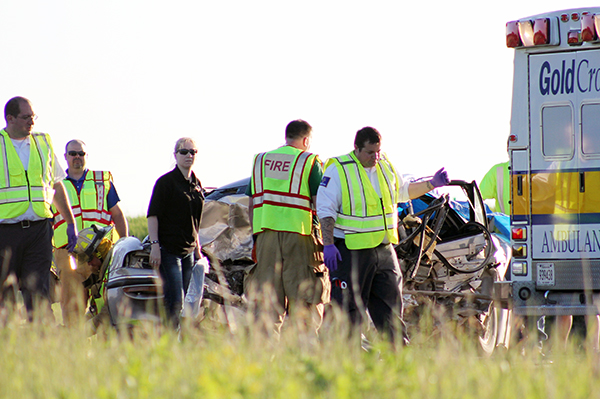 Emergency personnel respond to a double fatality on Interstate 35 one mile north of the Iowa border on May 28. – Sarah Stultz/Albert Lea Tribune

Traffic fatalities within Freeborn County stayed consistent in 2014 from the prior year.

There were three fatalities within the county, all of which took place on Interstate 35, according to Tribune records. The first person died in January after a crash on an icy portion of the interstate near the Clarks Grove exit, while the other two people died in May after a head-on collision on I-35 south of Albert Lea, one mile north of the Iowa border. 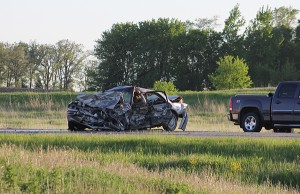 This vehicle was one of two involved in a head-on collision May 28 on Interstate 35 one mile north of the Iowa border. Two people died in the crash. – Sarah Stultz/Albert Lea Tribune

This is the fourth year consecutively that there have been five or less traffic fatalities in the county.

The following is a brief synopsis of each crash in 2014 in Freeborn County:

• Steven Daniel Selvig, 20, of Northwood died Jan. 16 at St. Marys Hospital in Rochester from injuries he sustained in a crash two days prior.

According to the Minnesota State Patrol, Selvig was driving a 1997 Ford Taurus southbound on I-35 when he was struck by a 2008 Ford pickup, driven by David A. Vanderploeg of Hollandale.

Vanderploeg had reportedly been driving northbound when he lost control of the pickup and crossed the median into the southbound lanes.

The road was icy at the time of the crash.

Both men were wearing their seat belts, and no alcohol was detected.

• James D. Winnes, 28, of Albert Lea and Kirt H. Schmidt, 46, of Owatonna died May 28 after a head-on collision on northbound I-35 one mile north of the Iowa border.

According to the State Patrol, Schmidt was driving a 1995 Mercury Sable southbound in the northbound lanes, when his car collided with a 1998 Buick LeSabre, driven by Winnes.

As a result of the crash, the Buick was pushed into the trailer of a 2013 Volvo tractor, driven by Edward D. Renchin, 52, of Fairmont. The trucker was not injured.

Winnes and Schmidt died at the scene from injuries sustained in the crash and had to be extricated from their vehicles. There were no passengers.

Why Schmidt was traveling the wrong way on the interstate remains unclear.

The crash was beside the Minnesota Welcome Center rest area.

Traffic fatalities by the years