Goldie Dolly Buendorf, 100, of Alden died Tuesday, Dec. 30, 2014, at The Shepherd’s Inn in Wells. A funeral service will be at 10:30 a.m. Saturday at Redeemer Lutheran Church in Alden with the Rev. Cherie Daniel officiating. Burial will be in Alden Cemetery. Goldie’s family wishes to express sincere gratitude to all the staff at The Shepherd’s Inn in Wells, Mayo Hospice Care Staff and the Rev. Greg Ofsdahl, who provided care and compassion for Goldie and her family during her last year of life. Memorials are suggested to Senior Dining, Redeemer Lutheran Church, The Shepherd’s Inn, Freeborn County 4-H organization or Mayo Hospice. Bruss-Heitner Funeral Home is in charge of arrangements. Please see www.brussheitner.com to leave online condolences. 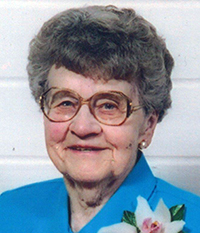 Goldie Dolly was born Dec. 7, 1914, in Alden Township, Freeborn County, the daughter of Leonard and Dora (Envoldsen) Paulson. Goldie attended elementary school at the one room Van Deer School, which was a 2-mile walk from her rural home. After consolidation, she attended and graduated from Alden High School in 1932.

On June 20, 1935, Goldie was united in marriage to George Harold Buendorf at Wells Lutheran Church. George and Goldie farmed 3 miles west of Alden, on land homesteaded in 1893 by Jens Paulson, her grandfather from Denmark. They successfully managed a registered Holstein dairy herd for many years. Goldie retired from her farm duties and moved to Alden in March 1984.

When Goldie was young she attended First Baptist Church of Alden, which was located across the street from Grace Lutheran Church, now known as Redeemer Lutheran Church. After her marriage she joined Grace Lutheran and remained a lifetime member. She actively served in Alden High School band mothers, Women’s Mission Society, Ladies Aid of the Church, taught Bible school and assembled the monthly church newsletter for many years.

In 1945 David Standish, a resident of State Public School for Dependent and Neglected Children in Owatonna, became a member of the Buendorf family. David and his family have been part of Goldie’s family ever since. Beginning in 1886 the MN State Orphanage served as home to thousands of children before it closed in 1945.

Goldie and her husband, George, served as key leaders of the Alden Beavers 4-H Club for five years. Goldie served as clothing leader for over 15 years. In addition, in 1962, the Buendorfs hosted Aitan Bait-Halachmy, 21, from Tel-Aviv, Israel, under the International Farm Youth Exchange sponsored by the National 4-H Foundation. If asked what some of her happiest and most rewarding years have been, she always said serving as 4-H leaders. Goldie and George were honored when they received Freeborn County’s 4-H Meritorious Award.

In 1983 she was instrumental in starting Senior Dining in Alden and served as president of Senior Citizens at that time. Over 100 members participated in both social events for many years. Goldie enjoyed and benefited from all her time spent at Senior Dining, Senior Citizens and eventually received Meals on Wheels.

Goldie enjoyed playing cards, serving her community, her church and her family and friends.  She also enjoyed gardening, sewing, cooking and traveling. She kept current on national and world affairs, agricultural issues and health issues. She lived a century in the Alden area, and always embraced being part of the Alden family.

She is preceded in death by her husband, George, in 1974; a son in infancy; her parents; brothers Clifford (Beulah) and Donald (Arvilla); brother-in-law, Robert Trombley; and David Standish and his son, Pat Standish.