Memorial services for Ilene Blowers, 83, will be at 1 p.m. Friday at First Lutheran Church in Albert Lea. The Rev. John Holt will officiate. Interment will be at Hillcrest Cemetery. Visitation will be one hour prior to the service at the church. Online condolences are welcome at www.bayviewfuneral.com. 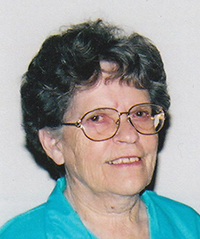 On March 31, 1951, she was united in marriage to Robert L. Blowers at First Lutheran Church. They lived in Albert Lea and raised two children, Roxanne and Brian. Ilene supported her husband in his career as a land developer. She and her sister, Donna, were interior decorators for a significant number of new homes built by their husbands “Bob and Ron Builders” in many Albert Lea subdivisions. She also enjoyed several years of work and celebrations with family and friends at their family-owned business, The Stables Supper Club. Many longtime residents of Albert Lea remember The Stables as a place where memories were made, especially during the holidays and on special occasions.

Ilene and Bob loved to travel. In the 1980s they lived in Anchorage and Wasilla, Alaska. In their retirement they enjoyed spending winter months in Harlingen, Texas. Throughout her life, Ilene was a devoted wife, mother, grandmother, great-grandmother and friend. She was a wonderful aunt to her nieces and nephews.

After her husband’s passing in 2013, Ilene resided at Our House Assisted Living in Austin, where she enjoyed the company of many wonderful new friends.

She is preceded in death by her parents Henry and Inga Dahl; in-laws Art and Adelaide Blowers; her husband, Robert; her siblings Kathleen Dahl, Phylis Dahl, Orva Breuer, Noreen Weitzel, Joanne Nelson and Donna Siblerud; and her nieces Rhonda Koziolek and Cheryl Siblerud.