Megan Lynn Levisen and Robert Justin Brooks, both of Seattle, were married at 4:30 p.m. Aug. 23, 2014, at Meadowbrook Farm in North Bend, Wash. The ceremony was officiated by Jacob Tomco. A reception and dance followed the ceremony. 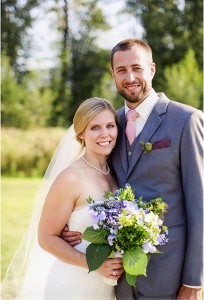 Megan is the daughter of Robert and Darlene Levisen of Albert Lea.

Justin is the son of Robert Williams Brooks of Bangor, Maine, and Kyle Ann Brooks of Forest Grove, Ore.

The bride is a graduate of Luther College in Decorah, Iowa, and is a pediatric oncology nurse at Children’s Hospital in Seattle.

The groom is a graduate of University Puget Sound in Tacoma, Wash., and Edmonds Community College in Lynnwood, Wash., and is a restoration horticulturist for King County in Seattle.