Memorial services for Mary Ann Wilder of Albert Lea will be at 10:30 a.m. Saturday at St. Theodore Catholic Church in Albert Lea. The Rev. Timothy T. Reker and Deacon Mike Ellis will officiate. Interment will be in Casmirs Cemetery in Wells. Visitation will be from 9 a.m. until the time of service at the church on Saturday. 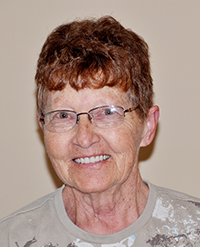 She was born Dec. 27, 1941, on a farm in Faribault County, the daughter of Harvey and Phyllis (Gaines) Latusek.

She attended  Minnesota Lake Schools. On July 30, 1958, she married Marvin L. Wilder in Minnesota Lake. They lived in Faribault County for a short time and then in 1961, Mary Ann and Marvin moved to Freeborn County where together they lived, farmed and raised their family. After all the kids were grown, Mary Ann worked at Streater for 18 years and then Walmart for a few years before retiring in 2011. She was a member of St. Theodore Catholic Church and longtime member and volunteer at the Moose Club.

Mary Ann had many interests. She had collections of salt and pepper shakers, Coca-Cola keepsakes, matches and pencils. She enjoyed gardening, canning, cooking — she was exceptional — jigsaw puzzles,  fishing up North and trips to the casino.

Above all, family came first. She loved family gatherings and getting the house ready with everyone’s favorite treats. When family members needed help, she was always there to take care of their kids and help them out.

She was preceded in death by her parents; her son-in-law, Steven Dulitz; father-in-law and mother-in-law LeRoy and Helen Wilder; and brothers-in-law Pat Traynor, John Utzka, David Wilder and David Wanous.

The family would like to thank all of the staff at Thorne Crest Retirement Community for all their tender loving care.