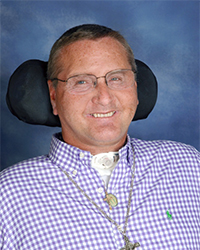 He was born June 19, 1963. Michael was raised and helped on the family farm in Glenville until he went to college at Mankato State. While there he studied science and mathematics. In 1986, Michael was struck by a car and paralyzed from the neck down.

During his life he enjoyed helping others, Minnesota sports teams, movies and music. Michael was a devout and active member of The Church of the Epiphany. He loved spending time in the sun!

Michael was a beloved son, brother, uncle, cousin and friend.

He was preceded in death by his grandparents Everett and Evelyn Iverson and Wilmer and Nadine Broitzman; uncles Dennis Broitzman and Norman Bauers; and aunt, Diane Broitzman.

Michael is survived by mother and father, Karen and Roger; sisters Jodi (Jamison) Doeden, and Lisa (Ashley) Broitzman; nieces Addison and Charlotte; and many other family and friends.