Jennifer Sosebee and Vicente Guerra, both of Albert Lea, were married at 4 p.m. Oct. 4, 2014, at Gloria Dei Lutheran Church in Rochester in a double ring ceremony. The Rev. Charles Ortloff officiated. A reception followed at Rochester International Event Center in Rochester. 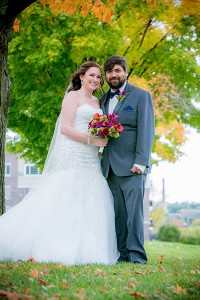 Vicente is the son of Jesse and Sheila Guerra of Albert Lea. He is the grandson of Wayne and Gloria Adams of Albert Lea, the late Jesus Guerra and Ray and Isabel Avelar of Joplin, Mo.

The bride is a 2006 graduate of Albert Lea High School and received her bachelor’s degree in social work from Minnesota State University, Mankato in 2010. She is currently a social worker at Golden Living Centers in Rochester.

The groom is a 2007 graduate of Albert Lea High School and attended Rasmussen College in Mankato. He is currently a photographer at KAAL-TV.

Host and hostess were Skip and Cia Warner, aunt and uncle of the bride, of Springfield, Ohio.

A wedding trip was taken to San Francisco from Oct. 7 to 11.