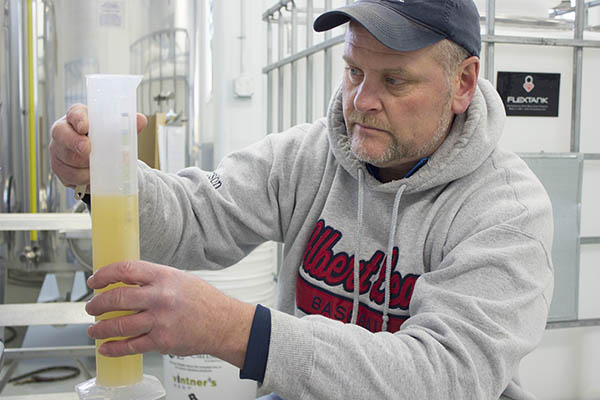 When fermenting wine, the yeast eats the sugar in the juice then turns it into alcohol. Toward the end of the fermentation process, Three Oak Wines owner Jay Enderson checks the wine every day to look at the sugar content. – Hannah Dillon/Albert Lea Tribune

The end of 2014 was just the beginning for Three Oak Wines, Albert Lea’s first winery. 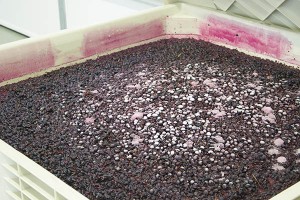 Some of Three Oak Wines grapes were fermented from frozen. These grapes are fermented with the skins on to keep the red color. – Hannah Dillon/Albert Lea Tribune

Jay Enderson is the owner of the winery, which now fills the former Wedge Nursery at 73505 225th St. north of Albert Lea.

Despite the first wine sales being on Dec. 19, the winery has been in the works since 2011 when the first grapevines were planted.

Enderson said 900 vines were planted, and those grapes produced the winery’s 2013 wines: a Marquette, a dry red wine, and a Frontenac gris, a semi-dry white wine.

Since Dec. 19, Enderson has sold all 400 bottles of the Frontenac gris and about half of the 900 bottles of Marquette. 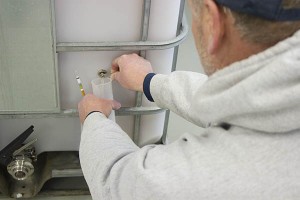 Three Oak Wines owner Jay Enderson takes a sample of pinot grigio to check the sugar content. The wine must be checked daily to look at the sugar to alcohol ratio. – Hannah Dillon/Albert Lea Tribune

In 2013, Enderson planted another 350 vines on the west side of the property, but the harsh winter of 2013-14 froze out many of those vines, essentially forcing them to start over.

It takes a minimum of three years for grapevines to produce grapes that can be used for making wine, Enderson said. After five years, the vines have reached optimum maturity. However, when a vine is killed by the cold, it isn’t rendered completely dead and must start over from the beginning.

The harsh winter last year was hard on many vineyards across the state, Enderson said — the state’s grape production was down 50 to 70 percent statewide. Some vineyards in northern Minnesota lost hundreds of vines, he said.

While the first crop was a little backward — Enderson said wine is usually fermented in the fall and winter to produce wines for the spring and summer, but his first batch of wine was fermented in the summer — he is just about on track for this winter. The second-year harvest is fermenting in the tanks now.

Enderson has a handful of new varieties fermenting in his production room with some Minnesota grapes as well as California grapes and juice.

In addition to the two 2013 varieties, Enderson is working on a La Crescent as well as some California varieties, including a cabernet sauvignon, chardonnay and pinot grigio.

There are also two fruit wines in production that were selected at one of the winery’s tastings: a raspberry pinot noir and a peach chardonnay.

Enderson has held four wine sale and tasting events, and he said the community has been supportive of the winery. Most of the comments he received were positive, but Enderson noted that wine is subjective as everyone has different tastes. 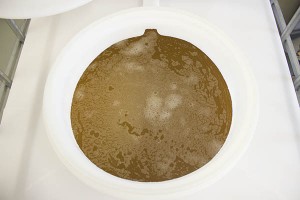 Due to a harsh winter last year, Three Oak Wines is using some California grapes and juice to make wines for next year. This pinot grigio is one of the California varieties, and should finish fermenting in about 10 days. – Hannah Dillon/Albert Lea Tribune

He called this winter a “soft opening” as the winery still isn’t completely finished — the wine tastings were held in the production room rather than a tasting room, for example, as the tasting room isn’t completed.

The tasting room is the next big step for the winery, Enderson said. He hopes to have the room completed in a year, though more wine should be available next spring, summer and fall.

Enderson’s No. 1 goal, however, is to make good wine first, then build a facility around it.

“If you have good quality wine, people will come back,” he said.

In the future, Enderson said he hopes to have one or two wedding spaces at the winery as well as have the ability to host harvest or art festivals. He said it could even be a spot for the farmers market.

Three Oak Wines can be found on Facebook at facebook.com/threeoakwines. The rest of the Marquette is being sold by appointment by calling Enderson at 507-383-1273.