Funeral services for LaVonne M. Bonnerup will be at 11 a.m. Monday at First Lutheran Church. The Rev. John Holt will officiate. 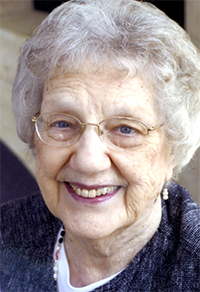 Interment will be in Graceland Cemetery. Visitation will be from 4 to 7 p.m. on Sunday at Bonnerup Funeral Service and one hour before the service at the church.

Bonnie died Thursday, Feb. 19, 2015, at Thorne Crest Retirement Community. She was surrounded by her loving family while cared for by the compassionate Thorne Crest and hospice staff. She was 92.

She was born on Jan. 14, 1923, in Faribault, the daughter of Albert and Lenora (Nelson) Langemo. Bonnie graduated from Albert Lea High School with the class of 1941. Following graduation, she worked at Skinner Chamberlain Department Store. On May 6, 1945, Bonnie married her high school sweetheart, Bob Bonnerup. They lived in Bethesda, Maryland, where Bob was stationed in the Navy until the end of World War II. Following the war, they came home to Albert Lea where they joined the funeral business with Bob’s parents Jens and Alma Bonnerup.

Throughout her life, Bonnie worked beside Bob at Bonnerup and Son, and also made a loving home for her family. They spent many happy years on camping trips with their four children and dog, Pal, in their tiny travel trailer, the Bee Hive, painted ’57 Pontiac Seamist Green, the notorious color of the funeral home fleet at that time.

They shared cherished times together as a family at their rustic cabin on the Island at Pickerel Lake. Later, Bonnie and Bob enjoyed time at their acreage near Oakland that they fondly called “The Farm.” That was often the location of the infamous annual Bonnerup Picnics where Bonnie always prepared a feast for her children and grandchildren.

Bonnie had many lifelong friendships. She and a group of high school friends started a Sewing Club during World War II and remained connected for life. Her Fountain Street neighborhood friends pooled their money to buy a picnic table for the Court Lane Circle to have a place for their daily 10 a.m. coffee gatherings. Bonnie maintained that same closeness with friends in her supper club, mission circle and birthday club.

Bonnie enjoyed sewing, quilting and especially knitting. She knit special baby sweaters for all her grandchildren and great-grandchildren.

She also loved to cook and bake and Bob loved eating. They were a good team.

She was preceded in death by her parents, her husband, Robert “Bob” Bonnerup; her brother, Robert Langemo, and his wife Elaine; sister-in-law, Ann, and her husband Gordy Trytten.

She will be lovingly missed.