Proving himself worthy of life in the U.S. 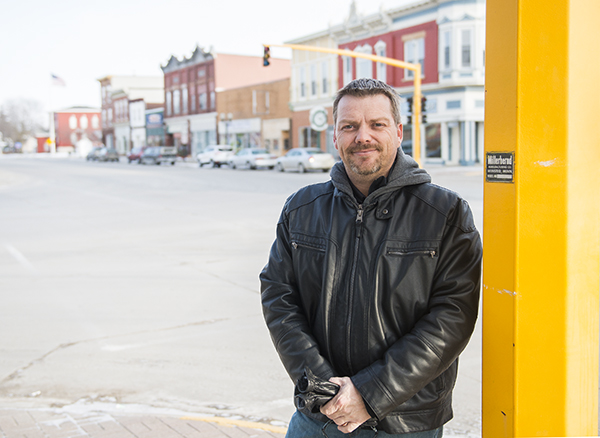 James Shaman was born in Winnipeg, Canada, and moved to the U.S. with his family when he was 2. Shaman, now 40, has endured a four year-long immigration struggle stemming from a run-in with the law from when he was about 18 that nearly got him deported. – Colleen Harrison/Albert Lea Tribune

A mistake made over 20 years ago almost got an Albert Lea High School graduate kicked out of the U.S.

When Shaman was 18 or 19, he was arrested, charged and pleaded guilty to possessing stolen property and aiding and abetting burglary. He said he helped steal and then transport stolen cigarettes. He was in jail for 35 days, on probation for two years and paid restitution. Shaman said his closest run-in with the law since was a speeding ticket in 1996.

“The first five minutes I was locked up, that was it,” he said. “I knew I had to change. … The 34 days, 23 hours and five minutes left that I had after was punishment, pure punishment.”

Afterward, Shaman said he thought that was the end of it and moved on with his life. He got into radio, working at Power 96 in 2001 and 2002 before becoming a program/music director and radio host on 103.7 The Fox in Mason City. He got married and had a daughter.

On May 3, 2011, or the day after Osama Bin Laden was killed — as Shaman remembers it — he was traveling back to the U.S. after going to Winnipeg for his uncle’s funeral. When he was stopped at the border for a typical border check, Shaman said he was asked if he had ever been arrested before.

“Years and years and years I’d gone back and forth across the border since I was 18 or 19 years old and had a criminal record,” he said. “They had never asked me that before.”

Shaman told the border guards the truth, and told them the circumstances behind his arrest all those years ago. He said they asked him to please pull ahead into a garage bay, which Shaman said wasn’t out of the ordinary for border checks.

He said he sat there, along with his brother, for about 30 minutes before the guards came back to him. They had the two men sit aside while the car and their bags were searched. Eventually both of the brothers were separated, and Shaman’s brother was told he was free to go as he had been born in the U.S. and was a citizen. Their parents were traveling separately from the brothers, and they picked Shaman’s brother up when they went through the border and he filled them in on the situation.

“What I was told then was that there was a new law that had been put into effect,” said Shaman. “The new law stated that anyone with a permanent green card, if they had a criminal record they were deemed unsavory.”

According to Shaman, the guards basically told him that he wasn’t going to be allowed back into the country.

“I went into panic mode,” he said. “This wasn’t right, I did everything I was supposed to do.”

He said he was fortunate enough that the guards looked at his paperwork and realized Shaman committed his crime six months before a line that had been drawn on a calendar. Shaman said he was able to be “paroled” into the country.

“It was a different situation in that I was guilty of committing that crime,” Shaman said. “It wasn’t a case of being innocent until proven guilty. It was guilty and proving yourself worthy.”

He said if he hadn’t been paroled in, Shaman would have still been incarcerated awaiting trial.

They allowed Shaman back into the country — after cutting up his green card in front of him, fingerprinting him and taking his mug shot.

“It was awful,” he said. “It was like going through it all over again.”

When Shaman got back home he contacted Dan Donnelly, an immigration attorney based in Austin. Donnelly helped Shaman start the paperwork and the process, telling him that the entire process would take a good deal of time — around four to five years, at least. Shaman said Donnelly was able to have a number of Shaman’s past charges dropped and dismissed. His felony was then dropped down to a misdemeanor.

Shaman thought that his no longer having a felony background meant that the immigration issue would be dropped, but he found out that wasn’t the case. He and Donnelly were told they couldn’t fix the situation that way because it was done out of “immigration hardship.”

It was in 2012 that Shaman found that out, and a judge told him then that his immigration trial would be April 1, 2015.

“That meant that nothing was going to happen over the next three years,” said Shaman.

During those three years, Shaman was on parole, meaning that any minor infraction would have him deported. If he left the country, it would have been considered a self-deportation and he wouldn’t be allowed back in and wouldn’t be able to apply to come back for another 10 years.

“There are far worse places to be stuck than the United States of America, don’t get me wrong,” he said. But not being able to visit his family in Canada and overseas was tough, he said.

On Feb. 6, Shaman got an email from Donnelly that said he had good news and for Shaman to call him. The two had been in contact over the past months getting documentation and testimony together for the upcoming trial.

Donnelly had Shaman come in at 8 a.m. the morning of Feb. 8 — a Sunday. Donnelly handed him a paper saying that his trial had been canceled, with no other date listed. Not knowing what that meant, Shaman looked to Donnelly for answers.

Donnelly then told Shaman that there was a new prosecuting attorney for the state of Minnesota working in Bloomington who had been tasked with granting immigration relief to deserving cases. Shaman said he then sat in Donnelly’s office for about an hour and a half giving testimony for an affidavit that they then submitted to the U.S. attorney for immigration relief. That was the possible good news.

The possible bad news was that if there was a government shutdown, it could postpone the entire process for another couple of years.

Shaman said the paperwork was filed around 8 a.m. the morning of Feb. 10, and around 9:30 a.m. that same morning he got a call from Donnelly. He had received relief.

He said he should receive his green card in six to eight weeks, and when he gets his hands on it Shaman plans to apply for U.S. citizenship that same day.

“I wouldn’t wish this on my worst enemy,” Shaman said of what the past few years have been like. For over three years he couldn’t make any plans past April 1.

In the midst of the whole situation, Shaman and his wife got divorced. If he had been deported, their 14 year-old daughter, Hope, would live in the U.S. while he would be in Canada.

When Shaman got off the phone with Donnelly after finding out he had been granted relief, he said he just got up and walked out of work.

“I left,” he said. “I told everybody that it was over, and I got relief and that I would be back.”

He said he emailed his parents, who were overseas at the time, from his truck. He then called his sister and brother to share the news. After driving around a bit to calm himself down, Shaman said he drove right to Hope’s school and had her pulled out of class. After talking to Hope, Shaman then called his boss at the radio station.

Shaman said everyone where he works has been incredibly supportive. He said he told his boss right away when the situation first came about, especially since for the time being he would no longer have a green card.

“I give huge credit to Jim Coloff,” said Shaman. “He didn’t have to keep me employed, but he did.”

For the three years that the legal process went on, Shaman said he kept the situation relatively quiet. He told his closer friends and family, as well as his co-workers. He said that was simply because there wasn’t much to do at the time.

He said he went public with his situation in December 2014. He turned on his microphone at the radio station one day and was upset that he had to go down to Des Moines yet again to be fingerprinted. Shaman explained to his listeners what was going on.

Shaman’s not saying that all of those people didn’t deserve to be kicked out — he agrees with career criminals not being allowed to stay in the country.

He said the public reaction to his situation was extremely positive. The only negativity was coming from Shaman himself, and the frustration he felt with the entire process.

“To have that mistake come back all these years later,” he said. “That was half a life ago. And that half a life since has been much improved.”

Shaman said he has told his daughter that if he could go back in time, he doesn’t think he would change what happened when he was a teenager.

“It made me the person I am today,” he said. “It’s given me a profound respect for the law, no matter how screwed up it can be at times. … I own my mistakes and I know that made me a better man in the long run.”

While he doesn’t have any travel plans in the immediate future, Shaman said his daughter has talked about wanting to travel to France and he has considered a trip to Mexico.

“It’s nice to have plans beyond April 1,” said Shaman. “That feels really good.”