Memorial services for Patricia Ann Weis, 87, of Glenville will be at 11 a.m.  Monday at the Bayview/Freeborn Funeral Home chapel. Deacon Mike Ellis will officiate. Interment will be in Hillcrest Cemetery. Visitation will be one hour prior to the service at Bayview. Online condolences are welcome at www.bayviewfuneral.com. 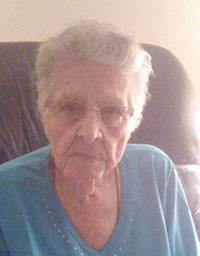 Patricia Ann Weis was born Sept. 14, 1927, in Clifton, Kansas, the daughter of Royal and Gertrude (Smith) Knoettgen. She went to school in Clifton and later in Beatrice, Nebraska, where she graduated from high school in 1945. Following high school, Pat attended nursing school. She worked for various doctors.

On July 20, 1946, Pat was united in marriage to Hubert Weis in Beatrice. The couple moved to Texas and later to Iowa where they retired. Together Pat and Hubert did a lot of traveling. They finally moved to Minnesota to be closer to their family. Pat enjoyed spending time with her grandchildren, great-grandchildren and great-great-grandchildren.

Pat was preceded in death by her parents; her husband, Hubert; and a brother.