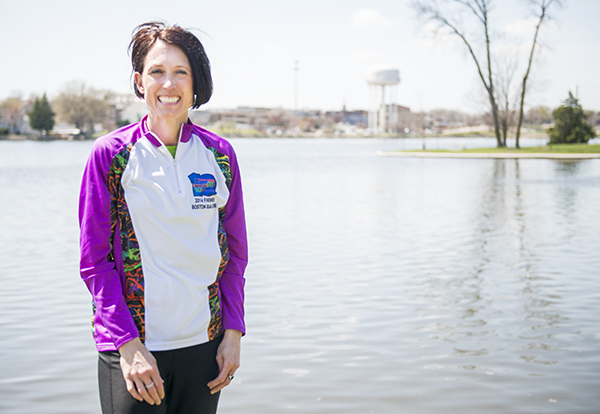 Robbi Woodside has been a runner since she was in high school, and ran her first marathon in 2004. She ran the Boston Marathon Monday, after qualifying in May 2014 and registering in September. – Colleen Harrison/Albert Lea Tribune

Running the Boston Marathon has been a dream of Robbi Woodside’s for the past 11 years.

On Monday, it came true.

Woodside, 49, said she has been running since she was in high school, where she started out as a sprinter. She ran her first marathon, Grandma’s Marathon in Duluth, in 2004. After that first race, she said she was hooked.

“The energy is unbelievable,” she said. “After that first one, I said, ‘I’m doing this until I make it to Boston.’”

According to Woodside, those competing in Boston first have to qualify to run in the marathon. Qualification times derive from a person’s age and running time. Woodside said she had to run one of the designated qualifying marathons and finish with a time of 3:55 or better. She ran the Fargo Marathon in May 2014 and said she got to the finish line with about three minutes to spare. In the past three marathons she ran to qualify for Boston, she said she missed her qualifying time by about the same amount.

When she ran her qualifying marathon last May, Woodside said she knew around the halfway point that she was well on her way to making her time. When she passed the finish line — where her cheering squad made up of her daughter, Bryn, and her friends were waiting — her thoughts were confirmed.

After finally getting her chance to run the marathon, she said it was time to start training for it.

Woodside said she regularly runs or trains four days a week when not preparing for a marathon. Once she was on her way to running in Boston, she said she upped her training to six days a week. She said a number of people helped her prepare, from personal trainer Annie Olson, to chiropractor Matt Tubbs, running partner Amy Rehnelt and, of course, her family. Woodside said her husband, Paul, and their children Bryn and Ben and Ben’s wife, Amanda, along with the rest of their family, have been extremely supportive. Her sister, Ronalee, drove her to her first marathon in Duluth and has been at a number of them ever since.

“A lot of people helped get me where I am,” she said.

Woodside said her son, who is a professional basketball player in Spain, texted her the other day to ask her how she was doing with race day approaching.

Dennis Dieser, executive director of the Albert Lea YMCA, also ran in the marathon and finished with a time of 3:48:49.

Woodside said her husband, daughter and her sister all flew to Boston to cheer her on. She also said that many of her friends and other family members would be checking a Boston Marathon app throughout the day to follow her progress and see her final results.

Running is like free therapy for Woodside. She said it’s relaxing and helps clear her head. Her favorite place to run in town is around Fountain Lake, where she said she alternates between looping around the lake and looping out into the country and back.

Now that she has reached her long-awaited goal of running in Boston, Woodside said it’s time for her to find a new goal to work toward. She’s not sure exactly what that will be yet, but it could either be running a 50k or running in the New York Marathon.

Woodside said her family motto is “live your dreams.” Her advice to aspiring runners is quite similar to that motto.

Interesting fact: Along with running, Woodside enjoys reading, cooking, spending time with her family and making wine in her spare time.