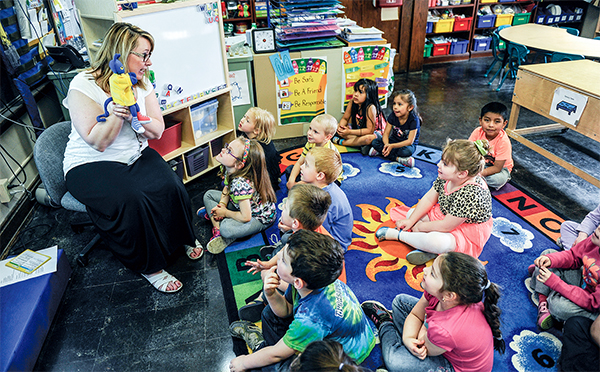 Local legislators and education experts aren’t so sure about a $343 million proposal to create universal preschool access for Minnesota 4-year-olds.

Gov. Mark Dayton’s plan may provide plenty of funding, but there are plenty of logistics to figure out before legislators and school districts get on board.

“It gets to become a problem of actually housing those students,” Sen. Dan Sparks, DFL-Austin, said Friday.

Dayton is proposing to offer free all-day early learning programs for 4-year-olds, which the governor’s office estimates would grow from about 47,300 students in the first year to about 57,000 students statewide.

Yet many districts would have trouble taking on more students without preparation.

“I think it’s admirable to look at funding all-day preschool,” Amy Baskin, director of community education at Austin Public Schools said. “It’s time has definitely come, but there’s a lot more details that need to be considered before we completely fund that.”

Austin already dealt with increasing student population by building a new school in 2012, but adding another class of students — in a district that routinely receives between 350 and 400 kindergarteners each year — would stress the district’s ability to provide learning space.

“There’s a lot of questions about how it would work,” Baskin said.

Baskin and other experts agree providing more access to early learning is key, but Dayton, the DFL-controlled Senate and House Republicans all disagree on how best to make that happen.

The Senate education budget proposal for schools released Wednesday includes $70 million in extra school readiness funding. That would let districts offer more preschool programming, but it wouldn’t necessarily be free to families. The Republican House has also balked at Dayton’s $343 million plan, which would essentially create a new voluntary grade for 4-year-old students at no cost to parents.

Sparks said the Senate’s plan makes sure to allow funding for private preschool operations and addresses early learning needs without taxing the state’s ability to cope with, in essence, a brand new grade of students.

“This allows a lot more children to be served, but we want to make sure that all education partners are at the table,” he said.

Dayton criticized the House and Senate plans as “unacceptably low” in the amount of the state’s projected $1.9 billion surplus devoted to schools. He said he won’t just split the difference to achieve compromise because that would be far below what he considers adequate.

“We’re so far apart that there’s nothing to begin to talk about,” Dayton said, adding of the legislative plans, “Neither one is acceptable to me.”

House Republicans are opting to push for roughly $10 million more in school readiness money and a $30 million increase in early education scholarships. Many advocates say those scholarships, targeted at the neediest children, will better address Minnesota’s racial and economic achievement gaps.

“If they want to create an all-day, every day program for the 4-year-olds with the money they receive, they’d have that flexibility. But the governor would actually propose making schools have it for everybody,” the Eden Prairie Republican said.

Dayton has said the projected surplus means scholarships and his proposal don’t have to compete.

Minnesota had one of the lowest rates of 4-year-old enrollment in publicly funded preschool programs in the 2012-2013 school year, according to a recent report from the U.S. Department of Education. About 15 percent of 4-year-olds participated in such programs, well below the national average of 41 percent and even further behind neighboring Iowa and Wisconsin.

The debate over education funding has expanded beyond the Capitol. The teachers union Education Minnesota is rolling out a four-week, roughly $200,000 ad campaign calling on Minnesota to invest the surplus in education, from early learning to college.

The Senate’s $17 billion education budget proposal includes a 1 percent increase in general school funding for each of the next two years. That falls between House Republicans’ proposed increase and the 1.5 percent bump per year Dayton has moved toward.