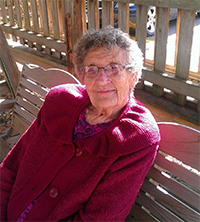 Miriam was born on Oct. 19, 1920, in rural Hayward to John and Helen (Cafourek) Kermes. During World War II, Miriam worked at Hormel Foods. She married Wallace Wangen on Feb. 18, 1948, at the church parsonage in Albert Lea. Wallace and Miriam spent most of their lives farming near Sargeant.

In their spare time, they loved to go dancing at the Terp Ballroom, snowmobiling and traveling. Miriam loved being outside; she especially enjoyed mowing, gardening, golfing, planting flowers and going for drives around the farm.

She also enjoyed baking, cooking, playing cards with her Brownsdale card club and the Minnesota Twins. Miriam always had a smile for everyone. A true matriarch, her greatest pride and joy was her family.

She was preceded in death by her parents John and Helen Kermes and her husband Wallace Wangen.

Miriam is survived by her sons and daughters-in-law Terry and Kathy Wangen of Brownsdale and Arleigh and Kim Wangen of Sargeant; daughters and sons-in-law Marci and Doug Luinstra of Brownsdale, Bonnie and Steve Williams of Austin and Annette Wangen of Rochester; 16 grandchildren and 16 great grandchildren.