Ruby Juanita Lutz passed away peacefully on Monday, April 6, 2015, at Bethany Rehabilitation Center in Lakewood, Colorado. She was 86.

Ruby Juanita Jones was born in Eureka Springs, Arkansas, on Sept. 28, 1928, the daughter of Walter Hanserd and Dorothy Faye (Chilson) Jones. She attended various schools, only completing her education through the eighth grade so that she could help her family and younger siblings. 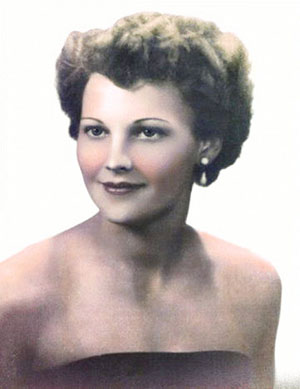 In 1957 she was united in marriage to Fereld Joel “Bud” Lutz. They traveled across the Midwest in their younger years, eventually settling in the Albert Lea area to raise their family. They relocated to Florida in 1996 and in 1997 they moved to Aurora, Colorado, where they remained.

Ruby was an extremely hard-working, talented and creative individual whose hands were never idle. She was always willing to try new things — once designing two board games that she submitted to have patented, and several songs that she wrote and had recorded. She was an avid poem writer, especially in her middle age. She was a wonderful gardener who planted beautiful vegetable gardens and always had plenty of flowers planted, both inside and out. She also sewed and crocheted extensively, creating hundreds of barbie doll clothes and kids clothes over the years, along with quilts, doilies and the occasional teddy bear. However, her biggest creative joy was her upholstery work. She had her own shop for many years out of her home in Albert Lea and remained an upholsterer into her early 70s.

She really enjoyed games and was known to have marathon sessions of poker or Yahtzee whenever someone was willing to play. She also loved her Bible, making sure that once her eyesight failed she would have someone read it to her on occasion or she would listen to her Bible tapes. She always said her nighttime prayers, no matter how tired she was.

She was preceded in death by her parents; three brothers, Harley, Franklin and Richard Jones; three sisters, Floretta McCoy, Vera Simmons and Geraldine Jones; and her husband, Bud Lutz.

Ruby was a feisty, fun-loving soul who will be dearly missed by all her loved ones.

A private family gathering will be in Colorado at a later date.