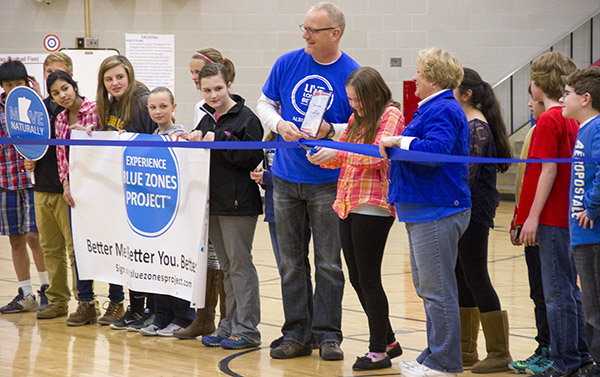 The school completed a series of items in the Blue Zones school pledge, which enables school leaders to create an environment that instills healthy lifestyle choices, according to a news release.

Principal Steve Kovach said the school offers healthy breakfast choices, including a grab-and-go option that allows the students to grab their breakfast and then still socialize before the learning day begins. That has helped double the students eating breakfast at the school.

He also talked about healthier options on the lunch menu and a wellness council, to name a few.

“We are proud to be the first Blue Zones school in Albert Lea,” Kovach said.

Ellen Kehr, organization lead for the Blue Zones Project, said Southwest — which is also the first Blue Zones school in the state — had implemented many of the initiatives necessary to receive the designation before the Blue Zones Project even came back to town last fall. It was just a matter of documenting that success.

“You are a shining example of what a Blue Zones school should be,” Kehr said during a ribbon-cutting ceremony.

She thanked the Albert Lea school board, teachers, the school’s principal and all those who made the designation a reality. She noted that 80 percent of the school’s teachers are involved in the Blue Zones Project on a personal level as well.