Funeral services for Patricia K. Dockham will be held 2 p.m. Tuesday at Bonnerup Funeral Chapel. The Rev. John Holt will officiate. Visitation will be held one hour prior to the service. Interment will take place at Hillcrest Cemetery. 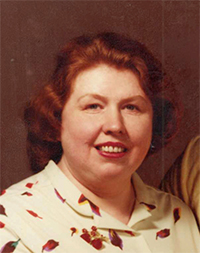 Patricia K. (Johnson) Dockham was born on Feb. 28, 1941, in Austin to Lowell F. and Jeanette R. (Thompson) Johnson. She grew up on a farm in the Austin area, and graduated from Austin High School. On Jan. 14, 1961, she was united in marriage to Kenneth M. Dockham at the St. Olaf Church in Austin. The family soon moved to Albert Lea where she stayed a resident. She was a member of First Lutheran Church in Albert Lea, and sang in the church choir when she was younger. Singing was an important part of her life, and she took great joy and satisfaction out of that. She liked to collect dolls. Patricia always had a pet, and in her later years, enjoyed when her daughter, Penny, would bring over her golden retriever to the nursing home.

She is preceded in death by her parents; husband, Kenneth; sisters Lola Johnson, Gloria Johnson and Lila Davis; and a sister-in-law, Lucille Johnson.

Patricia is survived by her daughter, Penny (Tom) Thompson, of Albert Lea; grandchildren Ashley, Whitney and Erik Thompson, all of Albert Lea; a sister, Rose (Dennis) Wendt, of Stewartville; and a brother, Kenneth Johnson, of Austin.