Attracting orioles, differentiating doves and getting rid of grackles 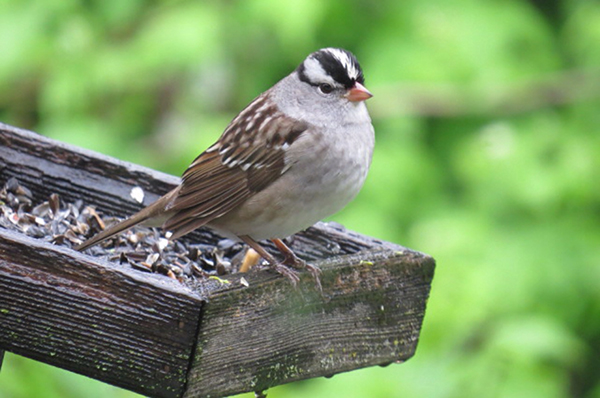 “Everything is nearly copacetic. I’m still eating gravy on my lettuce salad. I was on the injured reserve list for a few days. I had a chest cold. Ma gave me something that she said would fix me right up. It tasted terrible. Turned out, I was supposed to rub the stuff on my chest instead of drinking it. You know, Eleanor Roosevelt said, ‘You must do one thing every day that scares you.’ Getting out of bed usually does that, but I decided to give myself a true fright and head off to the big city and eat at a fancy restaurant. I’m much more comfortable and happy in one of the local slophouses, but I try to expand my experiences by entering an occasional exotic eatery. I’d eaten at this joint before. There was a guy standing outside the place. He was having a smoke. I walked up to him and said, ‘So, tell me, is the food still as bad here as it used to be?’”

“He blew a couple of smoke rings and said, ‘Well, I suppose it is. I’m still cooking it.’”

The rain came down in buckets without any buckets being involved.

There were ducklings, goslings and poults out and about. There is an old saw that said swallows and sparrows cannot understand the ambitions of swans. I doubt that is true. Each species wants to raise a family.

Dame’s rocket lined the roadsides and wooded edges. The flowers bloomed in shades of purple, pink, and/or white. The plant is exotic and invasive. It’d be easy to mistake dame’s rocket for wild phlox, but a close look at the flowers reveals that dame’s rocket flowers have four petals. Phlox have five, matching the number of letters in its name.

A small bunny appeared from the grass near the flowers. Cottontail rabbit mothers nurse the babies in the nest a few minutes at dawn and dusk. If the bunny is 4 to 5 inches long and its ears stand up, it’s weaned. Bunnies leave the nest when 4 to 5 weeks old.

A Baltimore oriole male chased a blue jay that had likely ventured too close to a nest. I watched a goldfinch pair fly in courtship circles. They made contact calls that sounded like potato chips. The American goldfinch is the state bird of Iowa, New Jersey and Washington.

A crow cawed and flew away. A person might not know many birds, but the crow is hard not to know.

I got wet, but it’s a small price to pay to see a rainbow.

Tim and Pat Donahue of Albert Lea feed peanuts to the blue jays. Blue jays love peanuts as a moviegoer loves popcorn. If Tim is tardy in providing peanuts, the jays peer into the window as if asking for some goober peas.

Dave Bair of Fairmont wrote, “Al, I can live with two or three grackles, but when a dozen dominate the feeders and chase off all other birds but starlings, I get mad. What can be done? I’ve taken away all the seeds and jelly so they will maybe get out of the habit of coming here. Will they come back when I put out feed again?” Removing the feeders for a time might lessen the numbers. Uninvited dinner guests are the bane of even the most gracious of hosts. There are ways to curb the onslaught of ravenous grackles other than hiring a crack team of common grackle scarers. Feed nyjer or suet and stop feeding seed mixes. Mixes are right up a grackle’s proverbial alley. Feed safflower seeds instead of sunflower seeds. Grackles find safflower the less desirable of the two. Fit cages or screens around your feeders, allowing only smaller birds access to the food. This could be homemade of chicken wire or purchased commercially. There are hopper-style feeders with weighted perches that close when larger birds or squirrels attempt to feed. Shorten tube feeder perches so that larger birds can’t find footholds. Wait the grackles out. They don’t enjoy our winters. If all else fails, become a fan of grackles. Get one of those foam, waving fingers that proclaims grackles as number one.

“Why do orioles abandon my feeders?” When hungry orioles arrive in the spring, they take advantage of jelly offered at feeders. When nesting and feeding young, their diet changes more to protein-rich insects. Baltimore orioles eat a lot of caterpillars.

“They may forget what you said — but they will never forget how you made them feel.” — Carl W. Buehner (Often incorrectly attributed to Maya Angelou)

“The first product of self-knowledge is humility.” — Flannery O’Connor