Funeral services for Doris E. Johnson, 91, of Albert Lea will be at 10 a.m. Tuesday at the Bayview/Freeborn Funeral Home chapel. The Rev. Kent Otterman will officiate. Burial will be at Fairview Cemetery in Hayfield. Visitation will be one hour prior to the services at the chapel. Online condolences are welcome at www.bayviewfuneral.com. 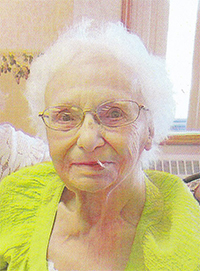 Doris Elaine Johnson was born on June 30, 1923, in Seibert, Colorado, the daughter of Hans and Emma (Kargas) Lange. She attended school in Flager, Colorado. On Aug. 23, 1944, she was united in marriage to Philip Johnson in Sargeant. Doris was employed as a CNA at Field Crest Nursing Home in Hayfield for 17 years. She enjoyed cooking, baking and spending time with her family and friends.

Doris is survived by her children Cheryl Gabel of Albert Lea, Denise Johnson of Albert Lea and Scott Johnson of Hayfield; grandchildren Troy and Robert Gabel and Ranielle Johnson; and nieces and nephews.

She was preceded in death by her parents; husband; son, Randy Johnson; sisters Inez Hegna and Mary Ann Klossner; and brother, Viron Lange.

“Oh ya,” was Doris’s favorite saying.