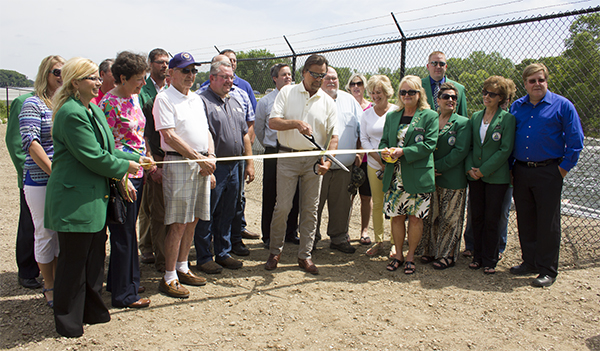 Area residents celebrated the completion of the new Albert Lea Lake dam and fish barrier on Friday on what some described as a historic day for the Shell Rock River Watershed District and the community. 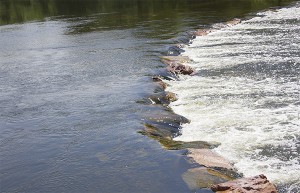 In addition to the new dam and fish barrier, the celebration showcased the watershed district’s headwaters project, which protects the 257-acre property that encompasses the headwaters of the Shell Rock River. This includes the banks of the first 1.4 miles of the river, the Juglans dam at the outlet of Albert Lea Lake and Juglans Woods, a combination of upland and lowland forest and aquatic and waterfowl habitat.

Andy Henschel, director of field operations for the watershed district, said the former dam was constructed in the 1920s and was in rough shape. It was replaced with a fixed-crest dam, with a rock-arch rapids design. It has a series of stepped pools with large boulders placed in arches and includes a water management structure and an electric fish barrier to help keep invasive carp out of Albert Lea Lake.

The fish barrier sends electric currents through the water, stuns the fish, paralyzes them and ultimately keeps them from moving through.

The structure is on the south end of Albert Lea Lake off of Freeborn County Road 19.

Henschel said the district staff hopes to bring that area back to the way it was during the 1920s, when people from all over the country came there to fish and hunt. The top goal is for clean water. 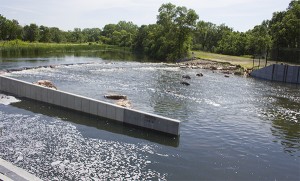 He thanked all of the partners in the project and the nearby landowners.

He said the project will help preserve the outdoor legacy for future generations.

Mike Lee, on the Freeborn County Board of Commissioners, described the project as a “great site to see.”

He said though he realizes there is still much work to be done, he hopes it can become a destination for Albert Lea and Freeborn County.

The projects tie in with the recent designation of the Shell Rock River Water Trail as a state water trail.

He and Lee thanked Albert Lea residents who pay the taxes to make the projects a reality.

“It really is all of you who make the difference and will make that difference for future generations,” Kehr said.

The land will soon be transferred to the Department of Natural Resources.