Funeral services will be at 10 a.m. Wednesday at The Church of Jesus Christ of Latter Day Saints in Austin, 404 31st St. NW, with the Rev. Richard Bremner officiating. Visitation will be from 9 to 10 a.m. Wednesday at the church prior to the services. Interment will be in Fairview Oakland Cemetery. 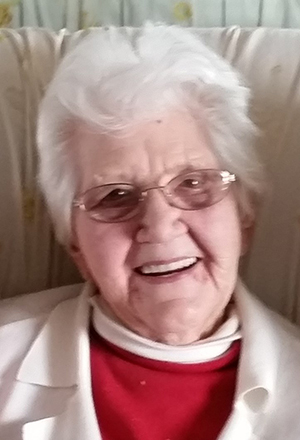 Vera Barnes was born April 14, 1920, in Moxee, Washington, (Yakima County) to Franklin and Mett (Barney) Barnes. She was the fourth child and oldest daughter of eight children. After moving frequently in her early years around the Washington, Idaho and Montana areas, her family settled in Belgrade, Montana, when Vera was in her early teens. It was there that she completed her formal education through eighth grade. She spent countless hours helping with the farm chores and caring for her younger brother and sisters. In 1947, at the age of 27, she served a mission for the Church of Jesus Christ of Latter Day Saints in the Kentucky-Tennessee mission. While serving in the Kentucky area, Edwin Petersen — simply a letter correspondent up to that point — came to visit her and after only a few days asked Vera to marry him. Upon her release from her mission they were married in the Idaho Falls Temple on Jan. 26, 1949. Vera and Edwin settled near Oakland where they farmed and raised their large family of 12 children.

Vera often helped with the farm work, even when pregnant. She served faithfully in The Church of Jesus Christ of Latter Day Saints, much of the time having multiple callings and duties. Vera was also very active in the community, holding leadership positions in 4-H, Farm Bureau Women and the Parent Teacher Association. Desiring to finish high school, Vera took a mail-order General Education Development course and triumphantly got her high school diploma in 1964. She was nominated for Minnesota Mother of the Year at one point. Vera and Edwin did a lot of traveling as their children got older, including trips to South America, Europe, and the Middle East. In 1982 they served an 18-month church mission to Ireland, and later an 18-month mission in the Chicago Latter Day Saints temple. Vera loved the outdoors and was a self-proclaimed tomboy. She loved to ride horses and fish and camp in the mountains. She loved a good joke and always had a witty quip ready, even in her final weeks of life. Vera was in excellent health until suffering a mild heart attack in March 2015, and then in late April had emergency abdominal surgery for an ulcerated stomach. She never truly recovered from the last surgery, and passed away peacefully at home.

She was preceded in death by her parents Franklin and Mett Barnes; son, Lowell; grandson, Matthew; four brothers; and two sisters.

In lieu of flowers memorials can be directed to the family. Services are prearranged and performed by Worlein Funeral Home of Austin. Condolences may be expressed to the family online at www.worlein.com.