Woman adjusts to life in the U.S., teaches at Halverson Elementary 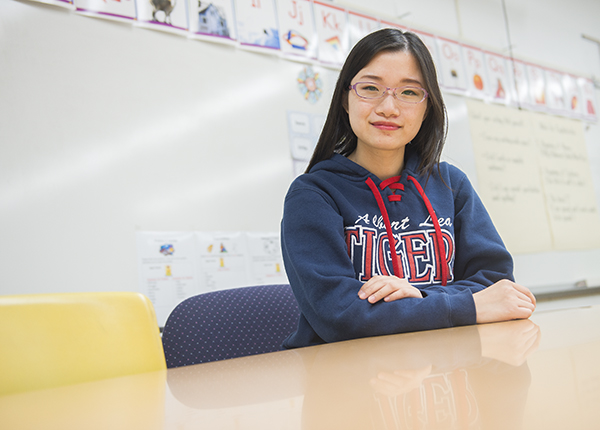 Fan has been an English as a second language teacher at Halverson Elementary School for almost one year. She’s originally from Suzhow, China, and moved to the United States in 2010. – Colleen Harrison/Albert Lea Tribune

Fan volunteered and was a student teacher in Twin Cities area elementary and junior high schools before moving to Albert Lea in August 2014. Since then she has taught English as a second language at Halverson Elementary School. She goes up to the university two to three times a week for her course work. Fan expects to have her new master’s degree in December 2017, but may extend it depending on her workload.

Fan said most of her current students’ first language is Spanish. When she worked and volunteered in the Cities, she said many of her students originally spoke Hmong, Lao, Karen, Ethiopian and Spanish. For Fan, teaching ESL and helping her students learn English is her dream job.

“I like building that connection with students — seeing their progress, seeing them grow over time,” she said.

Even with the successes, Fan said her first full year of teaching on her own didn’t come without any challenges. Even with her years of student teaching and volunteering, she cited her level of experience as an obstacle she has been working to overcome throughout the year.

“There’s so much more that I need to learn,” she said. “I’m still learning better ways to strengthen my students’ weaknesses.”

Students feeling frustrated or out of touch due to their new surroundings and the new culture they’re immersed in is something Fan can relate to personally.

All of Fan’s family still lives in China, where she’ll be visiting this summer for the first time in three years. She has a two month-long visit planned, and said her mother, Chenyin, has just about the entirety of those two months already planned out for her. Fan said her mother has visited her twice in the U.S.

Fan said that the climate was one of the major differences she has had to get used to. The southern part of China where she’s originally from rarely drops below 30 degrees in the winter, and the summers are regularly above 100 degrees. While Fan said she enjoys the cooler summers in Minnesota, she’s not sure she’ll ever entirely get used to the harsh winters the region typically experiences.

The differences in Chinese and American cultures have been an even more drastic change Fan has had to acclimate to.

“Everything’s different,” she said. “The way people talk, the way they think. You can’t see it but you can definitely feel it.”

Fan said that, to her, Americans are much more open and provide more detailed information to people they barely know or have just met. The concept of small talk between strangers is something she was not accustomed to before moving to the U.S.

Food has been another major difference. Fan said she originally tried cooking the same things she did in China when she was first in the Cities but found it hard to find the same ingredients she used back home. She has since picked up how to cook American food, and lists grilled cheese, chicken and wild rice soup, and biscuits and gravy among her favorites. She said while the American Chinese restaurants she has been to are nothing like the Chinese restaurants in her homeland, she does enjoy their food as well.

While she misses her family, Fan said the people she has met in the Cities and in Albert Lea especially have been extremely nice and welcoming. She considers herself lucky to have the co-workers she does at Halverson, and said she has made friends easily since moving to town.

Fan will continue to teach ESL at Halverson in the fall, and looks forward to another school year. She said this first year felt somewhat like an experiment, and she’s excited to return with more experience and more answers for her students.

Family: All of Fan’s family, including parents Chenyin and Yuejin, live in China

Interesting fact: Two of Fan’s favorite hobbies are painting and playing the piano