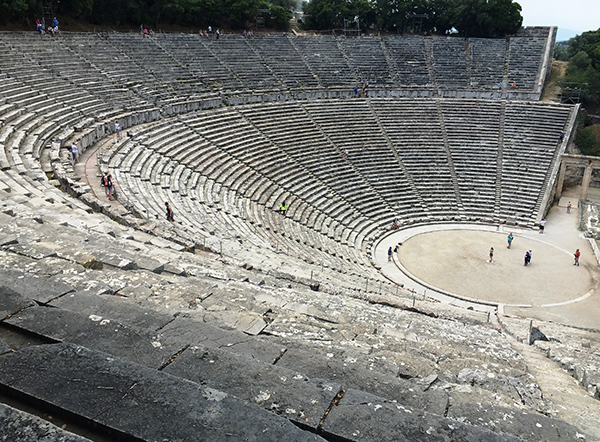 That speck in the center of the ancient stadium floor is Rika Boorsma, an Albert Lea High School 2015 graduate, singing “Hallelujah,” each note reaching the top rows at Epidaurus in Greece. Students and chaperones on the trip were amazed by the stadium’s acoustics. – Photo by Carine Rofshus

Editor’s note: This is the first of a two-part series on a group of 40 Albert Lea High School students and chaperones learning history on a European tour.

One week they were walking the halls of Albert Lea High School. The next week they were hiking the ancient ruins of Athens and Rome. From June 8 to 16, almost two dozen students discovered the roots of modern civilization by touring Greece and Italy.

They also learned some things about themselves during the tour that included several sites across Greece, a night ferry to Italy, a tour of Pompeii and three days in Rome.

“One of my favorite moments was when we were on the boat and we didn’t use our electronics, and we were all bonding over the trip,” said Charley Fleek, who will be a freshman at Albert Lea High School this fall. “I learned a lot about the history of the cities and all the places that we went to.”

That time on the ferry also stands out to Alexa Drescher, an ALHS junior this coming school year.

“It was a great trip with great people,” she said. “My favorite memory was on the ferry ride from Greece to Italy when a group of us kids played card games until 11 p.m. Lots of laughter and bonding time for sure.”

The tour group consisted of 22 students in grades eight through 12 and 18 adults, including social studies teachers Gerald Bizjak, Neil Chalmers and Diane Meza. 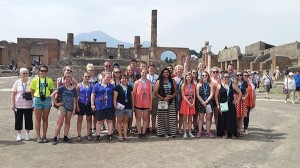 “My main goal all along was to expose them to different places and cultures in a way that no book, video, presentation, etcetera, could do,” Bizjak said. “The group was great and the whole trip totally exceeded my expectations.”

Bizjak organized the trip through EF Tours, a company that has offered experiential learning, cultural immersion and authentic connections for students since 1965.

The tour company advised students and chaperones that this would be an educational trip, not a vacation. The Albert Lea tourists usually hit the sights starting around 8 a.m. and returned to their hotels after supper. Many chose to wake up early or stay up later to experience more. For example, more than a dozen met at 5:30 a.m. one day in Athens to walk the beach and swim in the Aegean Sea.

Along their journey, students and chaperones made new friends, including nine people from Tennessee. This group from Knoxville — seven students, one parent and one Latin teacher — joined the ALHS group’s tour at the Athens airport.

Christian Olivo, the tour manager and a native Italian, bonded with the group through his engaging personality, love of music and seemingly endless knowledge of American movies.

The tourists tried new foods like baked goat cheese wrapped in grape leaves and souvlaki, or grilled skewers of meat and sometimes vegetables.

They tested their physical endurance by walking up to 19,000 steps and 43 flights a day, as measured by one mom’s fitness tracker.

And they all learned to connect without a mobile phone or knowing the native language.

Not all lessons came from history. For modern Europe, conserving resources is a way of life. Because of concerns about air pollution from vehicles and limited land area, Greeks and Italians depend on their own two feet or mass transit for transportation. Cars are much smaller and parked creatively, sometimes sideways on the street or encroaching sidewalks.

Europeans minimize their use of electricity. Hotels guests needed to insert their key card — only one card per room even if four people to a room — in a special slot to turn on the electricity. That meant no leaving the air conditioning on while out of the room. Tourists were served ice with their drinks only once. And it appeared that everyone, whether living in an apartment with a balcony or a large villa behind wrought iron fences, hangs out their laundry to dry.

While the Greek economic crisis dominated the news, the students visited before it erupted into riots. Learning how to calculate daily currency rates and bargain for better prices were part of the experiences gained.

Check Monday’s Tribune for the second part of this series, where the students and chaperones experienced history by touring sites.