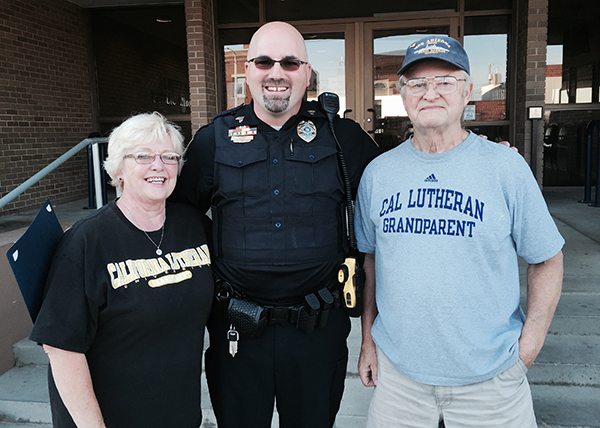 Tim Harves, a 14-year veteran of the Albert Lea Police Department, received the award after a June incident.

Roger Olson, whose life Harves is credited with saving, presented him the award.

“For him to present that award to me in front of my family and his family was amazing,” Harves said. “In today’s climate of law enforcement, it reminds me of why I do what I do.”

Harves received a medical call on the afternoon of June 20. Dispatchers gave information that Olson had fallen in a bathroom on Richway Drive, near the Green Lea Golf Course. He was in cardiac arrest when Harves arrived, the officer said. When Harves got to the door, Olson’s wife, Marlene Olson, led him to the scene, Harves said.

Harves said Roger Olson, who suffered a massive heart attack, was cold and unresponsive. He was facedown in between the vanity and bathtub. Harves turned him face-up, placed an AED pad over him, which delivered a shock, and performed CPR on him until other first-responders showed up, he said.

Olson was taken to the Mayo Clinic in Rochester and spent six days there recovering.

Roger Olson said he is thankful for Harves’ effort.

“He’s my hero,” Olson, 76, said of Harves. “Right now, I have a second chance at life. It’s kind of nice to be able to see my grandkids and hopefully get back to my previous condition.”

Olson said he is still recovering.

Defibrillators have been critical in saving lives, Winkels said.

Harves said his greatest joy in being a police officer stems from helping people in a tough situation.

“Being able to help someone navigate someone through their darkest day, bringing them through the other side and helping them make it through is my greatest joy in being a police officer.”

“I always had a drive to be part of something bigger,” he said.

Harves said he would go on ride-alongs and decided being a police officer was something he wanted to do.

“It’s kind of an honor,” he said of winning his fifth life-saving award. “You look back at that short of a time and realize you’ve helped save five peoples’ lives — that’s incredible.”

In his spare time, Harves enjoys spending time with his children and coaching baseball, swimming and snowmobiling.