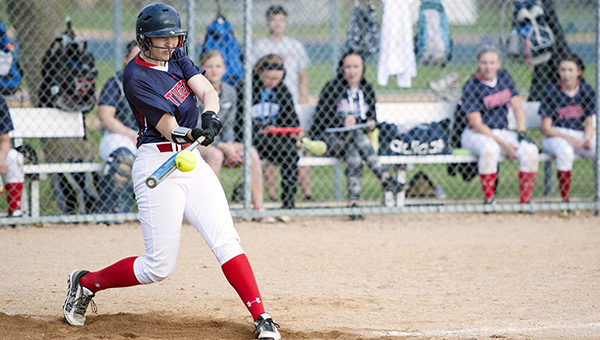 Kassi Hardies of Albert Lea hits one of her four home runs on the season on April 28 in the Tigers’ 10-0 win over Faribault in six innings at Hammer Field. — Micah Bader/Albert Lea Tribune

Power and consistency made Albert Lea senior Kassi Hardies a force at the plate.

Along with driving in 27 runs, the most in the Tribune’s seven-team coverage area, Hardies led the Tigers and was fifth in the area with a .444 batting average. 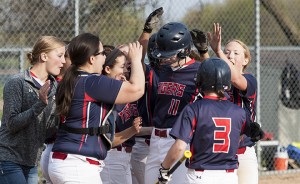 Kassi Hardies of Albert Lea is congratulated by teammates after hitting a solo home run in the bottom of the fifth inning on April 28 against Faribault at Hammer Field. — Micah Bader/Albert Lea Tribune

Hardies is the Tribune’s softball Player of the Year.

Despite hitting four home runs, which tied Hardies with Northwood-Kensett’s Shelby Low for the most in the area, Hardies said she wasn’t swinging for the fences every at-bat.

“It’s nice to hit home runs, but my goal was always just to advance,” she said. “I just wanted to get on base.”

As a junior, Hardies had 72 at-bats. She had the same amount this year, but her statistics improved. She had 32 hits after 22 last year. Her batting average jumped from .319, and she had 13 more RBIs than last year.

“Kassi has always been a hard worker and is very coachable,” he said. “She developed into a good player because she is intelligent and will do the little things she is asked to do by the coaching staff.”

In the No. 5 spot of the Tigers’ batting order, Hardies was clutch, Harms said.

“She really stepped up this year offensively to help fill the void in the middle after we lost Lynzee Underdahl to graduation,” he said. “I could always tell when she had the ball squared up. It had a distinct sound coming off her bat, which meant it was either a home run or a very hard-hit ball.”

Defensively, Hardies was solid at first base with a team-high 110 put-outs and only two errors in 21 games.

“She took a lot of pride in her defense and really prevented a lot of errors by digging balls out of the dirt and stabbing high or wide throws,” Harms said.

The Tigers finished the season 7-3 but lost nine of their last 11 games after injuries to the starting pitcher and catcher.

Hardies said one of the season’s highlights — along with the nine wins — was a 10-7 loss at Mankato West. The Scarlets had outscored Albert Lea by a combined score of 243-6 in the last 18 meetings.

“We’ve had a tough time with them every year, but we really put up a fight,” she said.

Next year, Hardies said she plans to attend Riverland Community College and play volleyball and possibly softball. Then she plans to transfer to the University of Minnesota in Duluth to major in finance.