Plants other than milkweed can play host to butterfly caterpillars 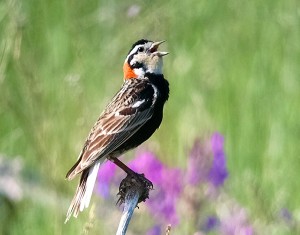 Erik Bruhnke of Duluth snapped this photo of a chestnut-collared longspur chirping into the wind. – Provided

“Everything is nearly copacetic. Last night, I had a dream that I was dreaming. I’m just glad that I find myself entertaining. Some days, I have to sit on my hands to keep from applauding myself. I got a corn on my foot. It’s the first and only one I’ve ever had. I guess that makes me a unicorn. A hungry unicorn. By the time I thought I should have a second pork chop for lunch, I’d already eaten a third. But I still had room for my favorite fruit–Skittles. There is a skinny person inside of me trying to get out. I find that I can calm him down with pepperoni pizza. I may lose weight occasionally, but I always know where to find it again. I’ve put on a couple of pounds. I blame it on that new shampoo I’m using. It says right on the bottle that it adds body. And it does. I’m trying to age gracefully, but that’s a difficult thing for any man who doesn’t look like George Clooney. I’m getting smarter. I know everything that Google knows. I chose the road less traveled and right now I have no idea where I am.”

Everything else was background music as I watched a turkey hen with two poults mosey through the yard early one morning. They stopped often to preen, drying themselves after a heavy rain had soaked their environment. When they saw me, the poults flew. The mother stood and stared at me as if she were a superpowered mom capable of lifting a car off her child. Maybe she was.

I thought to myself, “Have you ever seen anything so wonderful?”

I think that each day. Often.

North Dakota dreaming, but not on a winter’s day

I was up early every morning, but my weariness was easily overcome by awe. I was at the Potholes & Prairie Birding Festival headquartered in Carrington, North Dakota. It’s an amazing celebration of nature.

Tony Hillerman wrote, “I must confess that I have a weakness for empty places.”

I do, too. Even if they are truly far from empty. I plodded the prairies. I watched chestnut-collared longspurs, western meadowlarks and vesper sparrows, each species showing white outer tail feathers in flight. Sweet songs of the meadowlarks matched the sounds of 1000 perfect violins. The meadowlark, a signature species of the Great Plains, gives an elegance to any day.

Chase Lake is home to 17,000 pairs of nesting American white pelicans. Egrets, herons, Forster’s and common terns, and ring-billed and California gulls nest there. Chase Lake became a National Wildlife Refuge in 1908 in order to save pelicans. Some people shot pelicans just for the entertainment. A friend told me that there wasn’t a single farmhouse in the township where Chase Lake was located. From a houseless road, I watched the two-toned pelicans in flight, looking as if they were wearing black gloves.

Velvety black birds snatched flying insects over a pond. They were black terns. I watched a badger carrying her baby. I stared at a pair of western grebes running upon the water. Three young deer approached near as if they had never seen anything like me before. All these things were worth seeing.

Sprague’s pipits flew high in the sky. This is called skylarking and causes people seeking a lifebird to wish that pipits were the size of bald eagles.

A visitor from California asked, “What’s that bird I’m not hearing?”

Very early in the morning, that made sense.

So did being in North Dakota.

“Why did I see Canada geese flying north so late in the year?” Geese too young to breed and those that lost nests early in the breeding season undertake a molt migration. Geese lose all their flight feathers at once and with them, the ability to fly for a few weeks. Before this happens, they fly to secluded lakes or lakes with islands to wait out the molting process in safety. They may move hundreds of miles to large bodies of water where they feel secure as they molt. In September and October, many of these geese return from this seasonal journey. It allows us another chance to watch the miracle that is migration.

Sandy Smith of Shawano, Wisconsin, asked why the cardinal’s song varies in length. It’s hard for a man to say this, but I don’t know. I read somewhere that their songs vary in length from 1 to 6 seconds, with notes running from four to 43 in number. There is occasionally a marked acceleration and/or an increase in loudness toward the end. The male sings to attract a mate and to declare territory. I suppose he sings whatever song works for him.

“What plants other than milkweeds are good for butterflies?”

“God in his wisdom made the fly. And then forgot to tell us why.” — Ogden Nash