Summerset dedicates ‘The 39 Steps’ to memory of theater vet 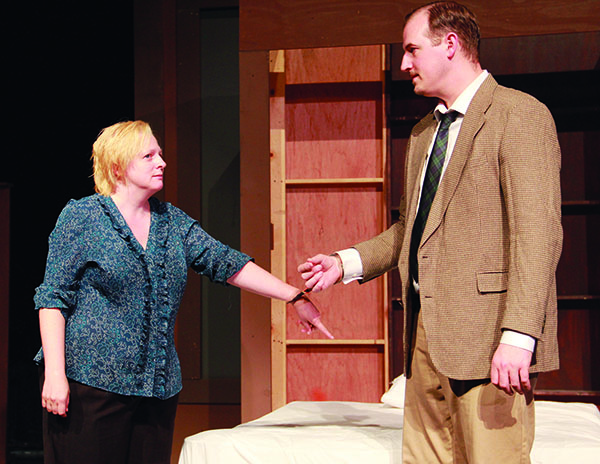 Summerset is dedicating each of its “The 39 Steps” performances to theater enthusiast David Dahlquist. – Jason Schoonover/Albert Lea Tribune

AUSTIN — When four actors take the stage starting Tuesday for Summerset Theatre’s “The 39 Steps,” the memory of an Austin theater enthusiast will be on their minds.

Summerset is dedicating each performance of “The 39 Steps,” which premieres  at 7:30 p.m. Tuesday at the Frank W. Bridges Theatre, to David Dahlquist.

Dahlquist was originally slated to direct the show but passed away in March — a month before the production process started.

“We’re kind of doing it to celebrate (David’s) theatrical life,” director James Douglass said. “We want people to go away remembering David in a fond way, but also we just want them to have a really good, fun evening at the theater.”

Dahlquist, a theater enthusiast for many years, acted and directed in many productions with Summerset, Riverland Community College and Matchbox Children’s Theatre. There will be a tribute to him at each performance, photos of him in the theater lobby and an opportunity to make donations in his name to Summerset Theatre.

“The 39 Steps” is the second show of Summerset’s 48th season. The play is a fast-paced “whodunit” and is a Tony and Drama Desk Award-winning comedy featuring more than 150 zany characters — played by a cast of four — an on-stage plane crash, handcuffs, missing fingers and some romance.

“It’s been a great cast to work with,” Douglass said. “We’re having a really great time putting it together.”

Douglass described the show as a cross between Alfred Hitchcock and Monty Python, as the show is based off the movie “The 39 Steps,” but reduced to four actors to add a comedic side. While Douglass said the show is challenging for the actors, he and the actors are excited for the show this week.

“It’s not often you get a show that’s got such great material for actors,” he said.

After opening on Tuesday, “The 39 Steps” the play continues at 7:30 p.m. each night until the closing performance on Saturday. All performances will be at the Frank W. Bridges Theatre on the Austin campus of Riverland Community College.

Individual tickets to the play are $13 for adults and $9 for children ages 16 and under. Tickets are on sale at the Summerset Theatre Box Office, located in room E107 in the East Building of the Riverland Community College Austin campus. The box office can be contacted at 507-433-0595 or by emailing boxoffice@riverland.edu. Tickets are also available for purchase online at www.summersetaustin.org.

When: 7:30 p.m. Tuesday through Saturday