MINNEAPOLIS — The University of Minnesota’s athletic director resigned on Friday after being accused by two female co-workers of drunkenly groping them and sending them lewd and graphic text messages during a recent gathering. 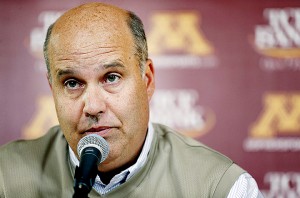 Norwood Teague will not receive a severance package from the University of Minnesota but will be available as a consultant at his current pay, $285 an hour, if needed, according to President Eric Kaler. Here, Teague paused before speaking during a March 2013 news conference. — Carlos Gonzalez/Star Tribune via AP 2013

The university released redacted transcripts of the sexual harassment complaints against Norwood Teague, which included texts to one woman in which he asked her to skinny dip and to let him perform oral sex on her.

The woman told school administrators that what started out as her texting with Teague about setting him up with one of her friends quickly devolved into Teague pinching her butt repeatedly and asking if she was open to cheating on her husband.

“Then his texting started to cross the line as he suggested skinny dipping, another drink with no touching, his attraction to me, etc.,” the woman wrote to school administrators. “At this point I responded, ‘No’ and ‘Stop.’ He continued to text.”

The other woman said Teague seemed intent on being next to her at the event and that she felt cornered by him at times. She said he kept asking when she was going to marry her boyfriend, and that he made unwelcome physical advances such as rubbing her back and poking her side.

Both women, whose names were blacked out in the report, said they left the event with others because they felt that Teague might otherwise try to follow them.

Teague apologized for having sent “inappropriate texts” in a statement issued through television station KARE 11. He said he drank too much that night and that he will be seeking help for an alcohol problem.

“I behaved badly towards nice people and sent truly inappropriate texts,” Teague said. “I’m embarrassed and I apologize to everyone involved. This neither reflects my true character or the true character of this great, great university.”

The school’s president, Eric Kaler, announced Teague’s resignation in an email to staff, pointing out that the women who accused Teague of harassing them are not student-workers and saying the university does not tolerate sexual harassment of any kind.

“The fact that we’ve pursued this aggressively and we’ve parted ways reflects a vigorous and firm statement about what the values of this university are and that his drinking doesn’t align with those,” Kaler said.

Teague was hired to replace Joel Maturi and was charged with reshaping a Golden Gophers athletic department that had fallen far behind the rest of the Big Ten in terms of facilities. His business-like approach and focus on the big-money sports of football, men’s basketball and men’s hockey contrasted starkly with the folksy Maturi, who prided himself on his commitment to lower profile sports.

Teague set about to raise nearly $200 million to bring new practice facilities for football and men’s basketball — a gargantuan task for a school that hasn’t had the type of sporting success that gets big donors to open their wallets. But Teague helped raise about $70 million in the first year of the plan, and the school had hoped to start breaking ground on new projects this fall.

“I feel bad for everybody in the situation. Certainly not a good situation, but I trust our president,” football coach Jerry Kill said. “I’ve talked to President Kaler and I trust him 100 percent, and everybody’s going to say we’re going to get that thing started,” he said, referring to the groundbreaking on the new facilities.

Teague carved out a reputation as a basketball administrator in his previous six years as athletic director at Virginia Commonwealth University, where he teamed with coach Shaka Smart to bring the little-known program to national prominence. While at Minnesota, he fired Tubby Smith and hired Richard Pitino, the son of coaching legend Rick Pitino, to lead the men’s program. He also replaced Pam Borton with Marlene Stollings on the women’s side.

Teague said he planned to “reassess my career and life options. While I’m proud of my career accomplishments, I want to stop and take a look at my life and alcohol issues.”