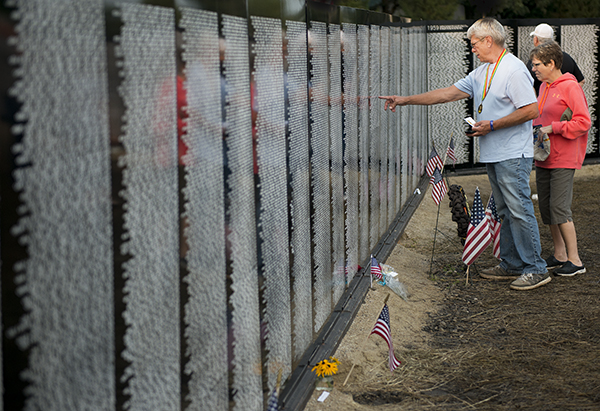 The Vietnam traveling memorial wall was set up at Heritage Park in Forest City, Iowa, over the weekend as a part of Operation LZ — a welcome home event for Vietnam War veterans. The wall is a 3/5 scale of the Vietnam Memorial in Washington, D.C., and is about 6 feet tall and 300 feet from end to end. -Colleen Harrison/Albert Lea Tribune

That’s what Vietnam War veterans were meant to receive from Operation LZ at Heritage Park in Forest City over the weekend.

Operation LZ — or Operation Landing Zone — was an idea conceived by a group of north Iowans from nine counties, led by Riley Lewis, Jack Caputo, Mark Frakes, Leon Christianson, Dave Kingland and Bob Havner, who decided to host a local event where all those who served in all services from 1962 through 1975 were honored and thanked. The committee of 25 from the nine counties raised funds from over 100 individuals, businesses and six county governments.

Activities included viewing the traveling Vietnam memorial wall, seeing military aircraft, tethered hot air balloon rides and air shows, among others. The event was meant for veterans to bring family, friends and community to receive honor and thanks.

The Vietnam War was a long, costly armed conflict that pitted the communist regime of North Vietnam and its southern allies, known as the Viet Cong, against South Vietnam and its principal ally, the United States. The divisive war, increasingly unpopular in the U.S., ended with the withdrawal of U.S. forces in 1973 and the unification of Vietnam under communist control two years later, when the war was officially said to have ended. More than 3 million people — including 58,000 Americans — were killed in the conflict.

For Albert Lea Vietnam War veteran Larry Lahs, the weekend celebration was a welcome change from the reception he first received when he returned home from Vietnam in 1969.

Lahs, now 72, first enlisted in the Army in 1961 and made a 20-year career out of his service before retiring in 1981. Over his years of service he was stationed in various parts of the U.S., as well as in Germany and Korea. He was first sent over to Vietnam in May 1968 and moved around to various parts of the country until he returned to the U.S. in April 1969.

“That’s not something you forget,” he said, when asked if he could recall the dates of his Vietnam tour of duty.

Lahs was originally trained to operate radar in conjunction with Nike Hercules missiles as a part of air defense. When he got to Vietnam, he said he was involved in air defense for all of three days until he was transferred to a supply unit. He eventually put in for a transfer that would put him in the 8th Battalion of the 26th Artillery, where he worked in a TAB — or target acquisition battery.

To this day, Lahs said he still has flashbacks to being in Vietnam. For years after he was back in the U.S. living with his wife, Mary, she’d tell him of the nights he’d wake her up screaming in his sleep — something he never remembered doing.

When Lahs first returned to the U.S., he said he and the other soldiers with him were greeted by protestors who spit on them as they left an airport in Fort Lewis, Washington. Later on, when he eventually tried to join a VFW, he was told by a World War II veteran, “We don’t want your kind.”

Lahs said the stigma surrounding the unpopular war was largely why he, as well as other veterans, didn’t talk about their experiences. For a time, he said he developed a drinking problem as a result of trying to self-medicate.

After more than 53 years of marriage, Lahs said he still hasn’t talked about the war to his wife at all, and has only talked about some of it with his adult son once.

He said a good deal of his residual issues from his service weren’t triggered until the start of the Iraq War in the mid-2000s. Lahs dropped about 40 pounds and said he constantly felt depressed and that his flashbacks were more prevalent than ever. In 2005 he was diagnosed with pretraumatic stress disorder, which is similar to posttraumatic stress disorder, but the reliving of traumatic events or episodes occur before the stressful situation ever takes place. Essentially, Lahs was reliving the trauma he survived in Vietnam because he felt the Iraq War was similarly unnecessary and would be increasingly unpopular — similar enough to dredge up old feelings from his combat experience. He was prescribed Prozac to combat the effects.

Lahs said he was going to go down to Operation LZ on Saturday, where he planned to visit the traveling memorial wall. He said he had a friend who died during his time in Vietnam while trying to take a woman and child to the safety of a bunker during a mortar attack. Lahs said witnessing that event in January 1969 was so traumatic that he can’t remember the man’s name, but hoped that seeing the names on the memorial wall might help him remember. He plans to go to Washington, D.C., for the first time in September to finally see the actual Vietnam Memorial, as well.

“This is going to help, a lot,” Lahs said of the Operation LZ weekend.

He said he hopes the weekend will help other veterans, of the Vietnam War and others, realize that they’re not alone.

“Join veterans organizations, they’re there to help,” he said. “You don’t have to feel alone, and you can’t do this by yourself.” 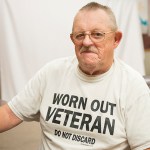 Albert Lea native Larry Lahs enlisted in the U.S. Army in 1961, and served until his retirement in 1981. He was stationed in various parts of Vietnam from May 1968 to April 1969. – Colleen Harrison/Albert Lea Tribune 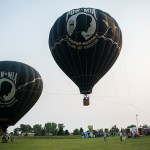 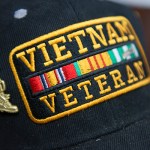 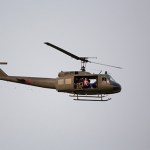 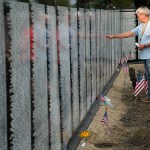 The Vietnam traveling memorial wall was set up at Heritage Park in Forest City, Iowa, over the weekend as a part of Operation LZ — a welcome home event for Vietnam War veterans. The wall is a 3/5 scale of the Vietnam Memorial in Washington, D.C., and is about 6 feet tall and 300 feet from end to end. -Colleen Harrison/Albert Lea Tribune