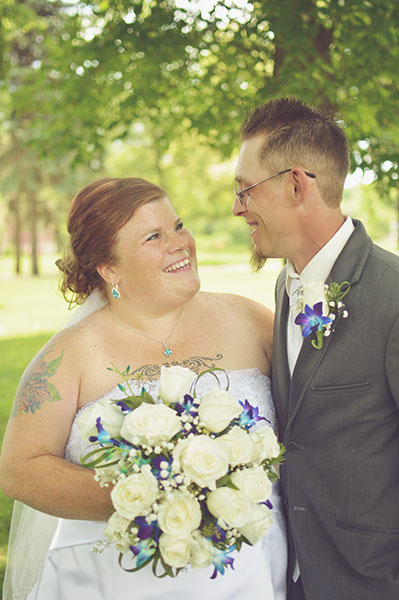 April Anne Smith and Samuel Eric Beighley, both of Albert Lea, were married in a double ring ceremony at 3 p.m. June 27, 2015, at the Marion Ross Performing Arts Center. The Rev. George Gillipsie officiated. A reception followed the ceremony at 5 p.m. at the American Legion in Albert Lea.

The bride is the daughter of the late Larry E. Smith of Rio, Wisconsin, and Thomas and Deanne Booth of Reeseville, Wisconsin, and the granddaughter of Ida Stremcha of Rio, Larry and Helen Delaney of Huntersville, South Carolina, the late Curly Stremcha, the late Robert and Ann Bornfleth and the late Harry Smith.

The groom is the son of Martha Beighley of Albert Lea and the grandson of Elton and Mavis Beighley of Gordonsville,  Dale Sorenson of Ramsey and the late Joan Sorenson.

The bride is employed at Field Crest Center in Hayfield.

The groom graduated from Riverland Community College and is employed at McNielus in Dodge Center.

Ushers were Gary Edstrom of Glenville and Charlie Schmidt of Alden.