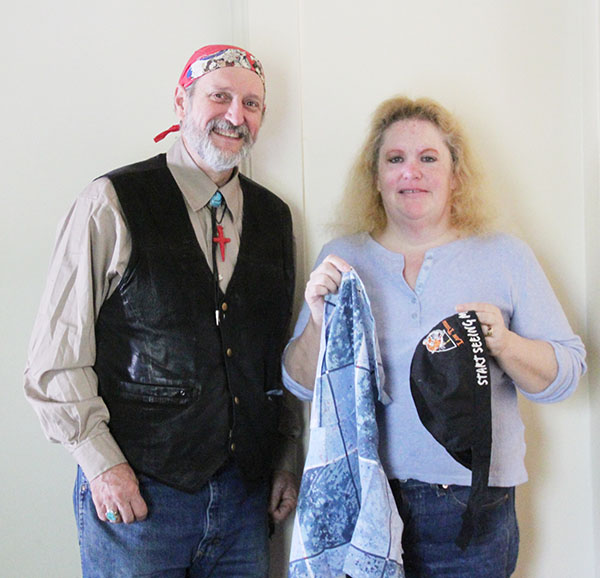 Richard and Jane Miller donate do-rags and bandanas to the homeless and cancer patients as a part of their ministry. – Sam Wilmes/Albert Lea Tribune

An Albert Lea couple has made a way of life out of making do-rags and bandanas for homeless people and cancer patients.

Richard and Jane Miller have made more than 1,000 bandanas and do-rags in the past three years as part of their ministry, Ministries of Project Happiness.

“There are people who nobody is doing anything for,” said Richard Miller, 56. “If we can make a difference, any difference we can make is a good thing. Doing something for others is a part of what I have always done.”

Jane Miller, 52, had the idea of making bandanas from the fitted sheets from the hotels that donated items for the ministry.

The do-rags and bandanas have been distributed to homeless people and cancer patients in Minnesota and Colorado, where the couple used to live. They hope to expand the operation but are looking for supplies to start.

They said they are in desperate need of old sheets, pillowcases, bed skirts, tablecloths, valances, curtains, clothing and flannel.

Their idea for giving do-rags to  cancer patients came about after they had a friend die of cancer in Colorado. They had a homeless ministry in Colorado and gave bandanas and other items to the homeless, including books and bedding. The couple would go out on Saturdays and gather clothing and other items.

The couple has made do-rags for the cancer center in Albert Lea. They are also shipping them to different places and are hoping to send them to rescue missions and cancer centers. They are looking at donating do-rags to the Ronald McDonald house in Rochester and starting a summer youth program next summer.

Jane Miller is originally from California, and her husband is from Texas.

She lived in Albert Lea for 16 years and made teddy bears out of fur coats for people. She met Richard 12 years ago, and he moved up from Texas. The couple left Albert Lea for California and then Colorado for six years, where Richard worked at a church.

He later resigned and began the ministry. The couple then moved back to Albert Lea two years ago to be closer to Jane’s mom and dad.

They have had to go through major issues since returning to Albert Lea. Richard Miller had a stroke, and his wife suffers from fibromyalgia, which affects her sleep patterns.

Despite the difficulties, the couple’s life mission has remained the same.

“I’m so used to doing things for others, this becomes natural,” Jane Miller said.

They enjoy working with children, the homeless and the destitute.

“That’s what I have always believed God wanted us to do, to serve others,” Richard Miller said.

Richard Miller will be at the Albert Lea Farmers Market on Sept. 26 and Oct. 3, accepting donations for the ministry and making balloon animals for children.

Donations can also be made at their home at 1019 Autumn St.

Livelihood: Richard is a Baptist minister and a part-time worker at Walmart.