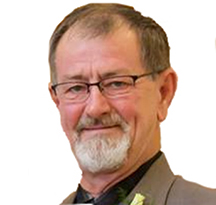 Irvin was born Sept. 15, 1952, in West Union, Iowa, to Levi and Alberta (Stockman) Gage. His family moved to Rochester in 1963, and he graduated from Mayo High School in 1970. On June 24, 1972, he married April Anderson in Rochester. Irv was employed as a commercial vehicle inspector by the Minnesota State Patrol for 28 years. In the following years, he started and grew a successful tour company in Rochester called JAG Tours which will be continued by his family. In his free time, Irv enjoyed spending time with his friends and family, feeding the birds and doing anything that allowed him time on his tractor. He will be remembered most for his always-present sense of humor and his unmistakable laugh.

Visitation will be from 5 to 8 p.m. at Macken Funeral Home on Monday. Funeral services will be in the River Park Chapel at Macken Funeral Home at 11 a.m. Tuesday with the Rev. Dan Doering officiating. Friends may call one hour before the service at the funeral home. Irv will be laid to rest at Grandview Memorial Gardens. The family asks that memorial donations be made to Cabin Fever Beanbag Tournament — a benefit supporting the Eagles Cancer Telethon.