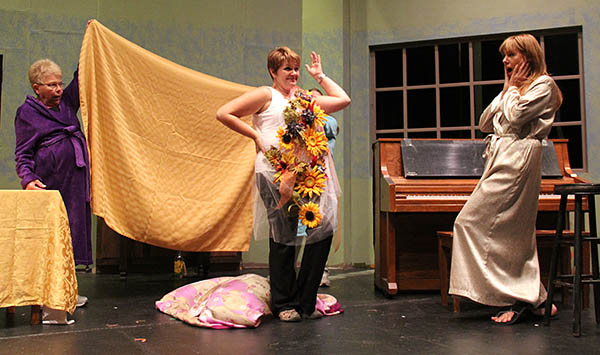 Play is an uplifting story of comedy, friendship, triumph and a little fun

An uplifting, feel-good story of friendship, ingenuity and triumph, “Calendar Girls” is a comedy based on an inspiring true story from England and adapted from the Golden Globe-nominated motion picture.

It will be directed by Steven Kinney. 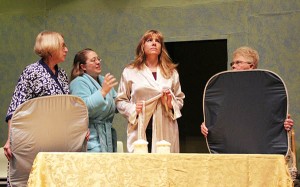 When Annie’s husband, John, dies of leukemia, Annie and her best friend, Chris, resolve to raise money for a new settee in the local hospital waiting room. They manage to persuade four fellow Women’s Institute members to pose nude with them for an alternative calendar.

Albert Lea Community Theatre board member Mary Ellen Johnson reassured people that costumes will be tasteful, and the message will be paramount.

“It’s a wonderful story, a tender story about these women who support another woman while her husband is dying from cancer and after,” Johnson said.

She said the board was initially hesitant to bring the play to Albert Lea because they didn’t want to get into something that wasn’t appropriate. However, the board ultimately decided unanimously to move ahead with  the play because its message will resound with many residents.

“Albert Lea is a community that stands behind each other and supports each other,” she said.

Kris Bartley, who plays Annie in the show, said “Calendar Girls” is a story about being who you are.

“At the end of the show the women are more confident about who they are,” Bartley said. 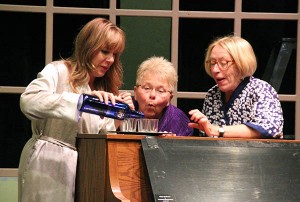 Tickets are available for $15 for adults and $10 for students. Tickets may be purchased over the phone by calling 1-877-730-3144, going online at actonbroadway.com or at the box office, which opens Monday the week of the show’s opening and is open every Thursday from 4 to 6 p.m. Tickets are also available at the Albert Lea Convention and Visitors Bureau. Season tickets can be purchased until Oct. 17.

In conjunction with the play, 10 percent of ticket sales will benefit the Cancer Center at Mayo Clinic Health System in Albert Lea. In addition, people are invited to honor loved ones fighting cancer or who have died from cancer by creating a paper memorial sunflower.

Each petal costs $1, to be paid for when the petal is dropped off at the box office at the Marion Ross Performing Arts Center.

People can cut out and decorate petals and include the name of the person they would like to honor.

Bartley said petals are available at the Albert Lea-Freeborn County Chamber of Commerce, the CVB, the Mary Go Round Shoppe, the Senior Center, Riverland Community College’s student affairs office and bookstore or at the box office.

Tickets: Can be purchased over the phone at 877-730-3144, online at actonbroadway.com, at the box office or at the Albert Lea Convention and Visitors Bureau. The box office opens Monday the week of the opening and is also open from 4 to 6 p.m. every Thursday.