Albert Lea runners frequent the front of the pack 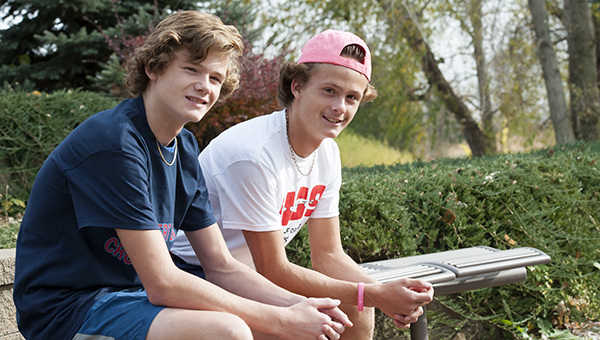 Brothers Carson Goodell, left, a freshman, and Jackson Goodell, a senior, await cross country practice Wednesday at Albert Lea High School. Either one or the other brother posted the Tigers’ top individual finish at all nine of the team’s meets this season. — Micah Bader/Albert Lea Tribune

Brothers lead the Tigers into the Section 2AA meet

Consistency has been a strength for the Goodell brothers.

Through nine meets this season, either Jackson Goodell or Carson Goodell posted the top individual finish for the Albert Lea boys’ cross country team and led the Tigers to four top-three team finishes. 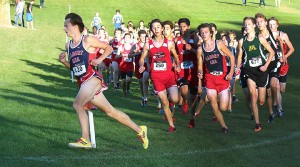 “My favorite part of being on the team this year has been running with my brother,” said Carson Goodell. “It’s a lot of fun. He pushes me to be better.”

Last year, Jackson Goodell won five regular-season meets and was the Big Nine Conference champion. This year, he won the four-team meet Sept. 21 at Fairmont, the seven-team meet Oct. 13 at Austin and was among the top seven finishers at all seven meets he competed in.

Carson Goodell is in his first varsity cross country season with the Tigers. He posted Albert Lea’s best time in the team’s first two meets and has five top-five finishes on the season.

In four meets, the brothers both posted top-five finishes.

The apples don’t fall far from the tree, as Jackson and Carson Goodell’s parents — David and Tami Goodell — both competed for the track and field team at Northern State University in Aberdeen, South Dakota. David Goodell said he was a middle-distance runner, and his wife was a sprinter and jumper. 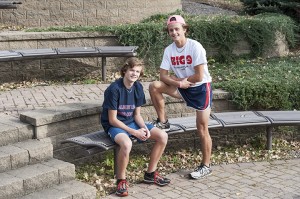 This is the second season the brothers — Jackson Goodell, a senior, and Carson Goodell, a freshman — had the opportunity to train together. They also competed on the Tigers track and field team last spring under the direction of head coach Kevin Gentz. The duo teamed with Caleb Troe and Tyler Anderson to take fourth in the 4×800-meter relay with a time of 8:27.46 at the Section 1AA meet at Lakeville South.

The brothers are three-sport athletes. Both compete in cross country in the fall, hockey in the winter and track and field in the spring.

“Cross country definitely helps getting in shape for hockey season,” Jackson Goodell said. “It helps in the third period when you need the extra energy.”

“Running in the front of the pack with all the other talented runners and winning is the best part,” he said.

“He understands how to run a race, and he’s taught these younger kids how to do it just through talking and showing and being there with the example of how it’s done,” he said. 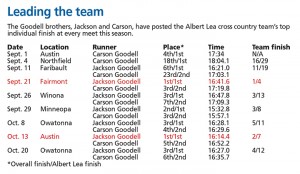 Haney said he’s seen improvement from Carson Goodell throughout the season. At the Tigers’ most recent meet, the Big Nine Conference meet Tuesday at Brooktree Golf Course in Owatonna, Carson Goodell took sixth place out of 83 runners with a time of 16:35.7 to become a Big Nine All-Conference selection.

“He’s learning how to run a competitive race,” Haney said. “Each race he seems to be figuring out where to go fast and how to hold off competitors.”

The duo will lead Albert Lea into the Section 1AA meet at 4:30 p.m. Thursday at Brooktree Golf Course, where the top eight finishers are guaranteed spots at the Class AA state meet.

“They’re great guys,” Haney said about the brothers. “I’ll obviously miss Jackson next year, but I’m happy that I’ve got another Goodell to work with for the next three years.”