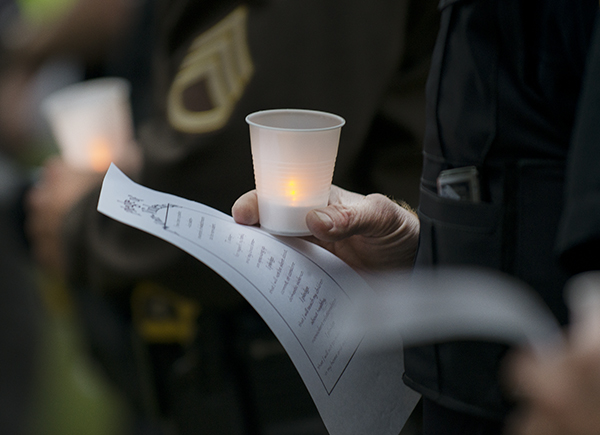 Something needs to be done.

That was the main message behind a candlelight vigil put on by the Freeborn County Crime Victims Crisis Center to raise awareness about domestic violence. The vigil, now in its 11th year, took place Thursday night in New Denmark Park.

Signs with faces and stories of lives snuffed out due to acts of domestic violence lined walkways in the park in attempts to illustrate the devastating toll abuse can take.

According to Crisis Center Volunteer Coordinator Dotti Honsey, domestic violence is the No. 1 incident law enforcement agencies in Freeborn County respond to.

“We need to do something to bring awareness of domestic violence to Albert Lea,” she said. “People think it doesn’t happen here, but it does.” 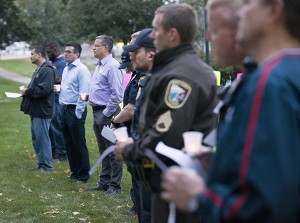 Both Honsey and Mauer said there are a number of misconceptions about domestic violence, one of them being that the situation should be handled within the family involved. They said too many people think it shouldn’t be talked about.

Another misconception — on top of locals thinking domestic violence doesn’t happen in Freeborn County — is that it only occurs in lower-class families. The Crisis Center has dealt with situations involving doctors, teachers and other professions, and Honsey said there is absolutely no economic disparity when it comes to domestic violence.

Mauer and Honsey said there is a cycle to abuse. There’s the initial blowup or outburst, which tends to be followed up by “the honeymoon phase” — where the abusive individual profusely apologizes and makes promises to stop the abuse, sometimes even volunteering to take anger management classes.

“It’s not about anger,” said Mauer. “It’s about power and control.”

As the abuse cycle continues, the frequency and brutality of the incidences increase. Mauer said the most brutal attacks come when the victim is most vulnerable — like when they might try to leave the abuser. She also said most domestic violence homicides occur when the victims attempt to leave.

Both Mauer and Honsey said domestic violence doesn’t always start out as physical in the beginning. It typically starts out as verbal abuse that slowly eats away at the victim’s self-esteem. That, along with partial to total isolation, puts the victim at the complete mercy of the abuser. The phrase “walking on eggshells” is one the two women hear all too often.

“They think they did something to deserve it. … That’s what they’re told,” Mauer said. “They’re trying to live up to unlivable standards.” 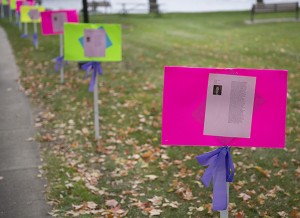 The Freeborn County Crime Victims Crisis Center put together signs with the faces and stories of victims murdered during domestic violence disputes to line the walkways of New Denmark Park during a community candlelight vigil Thursday. – Colleen Harrison/Albert Lea Tribune

The incidents that Mauer and Honsey see at the Crisis Center most often are cases where a woman is being abused by a male significant other. Over recent years they’ve seen drugs and alcohol play more of a factor in the domestic violence cycle, as well. Neither woman believes substances are cause for domestic violence, but said that they tend to exacerbate the situation and impair judgement all too often — like putting gasoline onto a steadily burning flame.

When children witness domestic violence between the adults they live with or against themselves, Mauer and Honsey said it can perpetuate the cycle of abuse. Some children grow up to abuse others because of what they witnessed in their younger years. Mauer said those children grow up having no control over their environment, and abuse others as adults to exert and regain some of that control they never had before. They grew up with fighting and now think that’s how situations are handled, and the fight or flight mode comes into play.

Honsey and Mauer have also dealt with situations where a male is being abused by a female significant other. They said males have more of a tendency to be shamed by others when it comes to opening up about abuse, and can be doubted and unsupported by law enforcement at times, as well. Men being abused in domestic violence situations tend to be nonviolent and don’t want to resort to violence to resolve their situation, they said, but can be put down by others as a result.

The Crisis Center has also worked with same-sex couples where one partner is abusing the other. Mauer said those couples have the added struggle of already having a disadvantage when it comes to public perception, making it harder for victims to both seek and find help.

According to Honsey and Mauer, blame is often placed back on the victim with one recurring question, “Why do you stay?” They said, to the victims, there’s no other option. Most victims either truly believe they have nowhere else to go, or are so physically, emotionally, mentally and — in many cases — financially controlled by their abuser that getting out of the abusive situation is no easy feat. Situations also become more complicated when children are involved, and are used as ways to control a victim by threatening to take away or harm a victim’s children.

There are no shelters for victims of domestic violence in Freeborn County. Honsey said the closest shelters are either in Mankato or Rochester.

Almost every single shelter in Minnesota was full this past summer, according to the two women. They also said summer and the warmer months in general tend to be when they’re dealing with the most cases. They believe it’s partly due to more people being out to call in when incidents are overheard or witnessed, and it’s also when more people are out partying and drinking — at times making tensions come to a head.

Since going at least an hour away for shelter isn’t an option for most — especially when children or jobs are involved — Honsey and Mauer said many again feel trapped in their situation. It can be extremely difficult to find affordable housing as a single individual who has had their finances controlled by an abusive partner. Even those who find a shelter can’t stay in them past a few months, they said.

For those looking to find shelter, Honsey and Mauer help them contact Day One — what Honsey calls a “clearing house” for shelter openings. Day One has a full database of different shelters and their openings and can help individuals locate a shelter with space for them. The Day One crisis line for those who don’t feel safe is 1-866-223-1111. Family and friends calling on behalf of someone who’s being abused can also call the same crisis line.

“The first question we ask is ‘Are you safe?’” Honsey said. “That’s the goal, making sure that they’re safe and have options.”

Friends and family members often come in or call the Crisis Center trying to help someone they care about who’s in an abusive situation. Honsey said those people can offer support to their loved ones, but the victims themselves have to be the ones to ask for help. When they do that, the Crisis Center can tell them what options there are. Honsey said it’s about putting the power back in the victim’s hands so they can decide for themselves what to do next.

“As a community we all need to work together to stop, to prevent, and to be aware of domestic violence,” Honsey said. “Domestic violence occurs, and it’s not OK.”