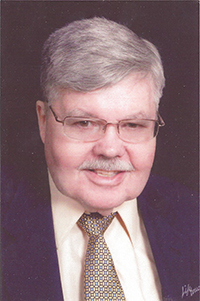 Art was born June 30, 1932, in Oak Park, Illinois, to Edward, a typesetter, and Margaret (Duff) Scherer, a homemaker and a firm Baptist. He graduated from Oak Park High School in 1950.  He was the football team captain and he also ran track.

Art went onto college at Illinois Institute of Technology and majored in industrial design until he enlisted in 1955. He served his country in the United States Army from 1955 to 1957 based in Germany.

On Aug. 22, 1953, Art married the love of his life, Audrey Irish. In 1960 the couple moved to Mason City, Iowa, where they became franchise owner and operators of a McDonald’s restaurant. They raised five wonderful children while building an empire of McDonald’s and traveling the country — but nothing was more important to him than his family. He relished his role as husband, father, grandfather and great-grandfather. The couple always made time for the family and, as a result, many business trips were converted into family vacations. Audrey struggled with cancer for several years and passed away on Jan. 4, 1989. Eight McDonald’s and 43 years later, Art retired from the family business in 2002.

His family said Art was a very lucky man in the love category. He fell in love with another wonderful woman, Kay Talbut, who he met on a blind date in Naples, Florida. Art and Kay were married on Nov. 17, 1991. Art’s family said, “Kay fit right in with our family and is the best addition any of us could have asked for.” In their 24 years of marriage they traveled to Turkey, Germany, Asia, Greece and the Caribbean Islands. Their marriage proved to be one of great love, memories and many challenges.

Art had many things he had a passion for. One was spending time with his grandchildren and great-grandchildren. Another was his love for painting. Many of his masterpieces were done when they were in Florida. He shared his paintings with many friends and family. Fishing was another hobby he loved. As his children grew up, they remembered all the fishing trips he would take with friends. When he would return he would clean the fish in the house. The smell of fish filled the house and some of his children liked it and some of them didn’t. Other things that Art enjoyed were playing tennis, hunting with the boys, spending hours in his flower gardens, spending time at Clear Lake with family, hosting dinner parties and spending time at the Austin Country Club with friends and family.

Even though Art was very dedicated to his work, he always found time to give back to the community through organizations. He served as president of the Mason City Jaycees, chaired Celebration Austin, was president of the Miss Minnesota Pageant and was a board president at Westminster Presbyterian Church. He also was a member of the chamber’s board of directors, Development Corporation of Austin, Rotary Club and Lions Club. He sponsored Rotary’s D.A.R.E. Bike-A-Thon for many years and was one of the founding members of the chamber’s 100 Club, which raises money for Christmas decorations. Art was also active within the McDonald’s Corporation, serving as president of both regional and national advertising cooperatives and as a director on the Ronald McDonald House board. In October 2005 he was honored with the Lifetime Achievement award, which recognizes outstanding business success and service to the community.

He was met in heaven by his parents Edward and Margaret Scherer; his first wife of 36 years, Audrey Scherer; his sister, Betty Wells, and her husband, Frank; and a great-granddaughter, Payton Wradislavsky.

Memorials may be designated to the Ronald McDonald House or Westminster Presbyterian Church.

A memorial service will be at 11 a.m. Saturday at Westminster Presbyterian Church. The Rev. Michael Olmsted will officiate. Visitation will be from 4 to 7 p.m. Friday at Clasen-Jordan Mortuary and at the church for one hour before the service on Saturday morning.