Tom was born on Oct. 15, 1951, on an island just east of Ireland to Thomas and Elizabeth Donnelly. 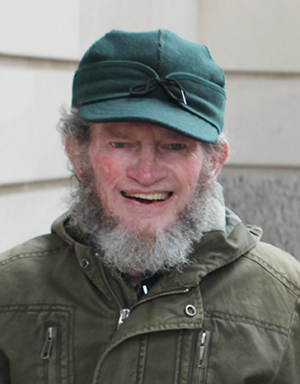 He spent his childhood in England, Okinawa and Texas and graduated from Dugway High School in Utah, where he was on the varsity teams for football, basketball and golf. He studied macrobiotic cooking in Boston where he met his future and former wife, Sheila O’Leary. They were married in Donegal, Ireland, in 1975. They later moved to the Blooming Prairie area where they farmed organically with draft horses raising cattle, sheep and chickens.

Tom, or “Digger,” as he was affectionately known, dug graves to the top of his head at 13 different cemeteries.

He was beloved by his many friends and could often be found manning the jukebox at Geneva Bar, opening the ceremonial Guinness to start the weekend at Harmony Park as the mayor, or serving as a mascot for the Minnesota RollerGirls as Tom Tom the Leprechaun.

He was quick witted. One of his favorite retorts to those who asked if he dug graves by hand was no, he used a shovel. He finished the crossword puzzle daily and loved to bird watch.

He was preceded in death by his parents, and a brother, Jerry.

Tom was small in stature but large in heart.

The family would like to invite all to celebrate his life with a burial at St. Mary’s Cemetery in rural Geneva at 2 p.m. Sunday, followed by food and merriment from 3 to 7 p.m. at Harmony Park.  They also ask those in attendance to wear green, Tom’s favorite color, and come prepared to toast Tom.