Venture off the beaten path with snowshoes 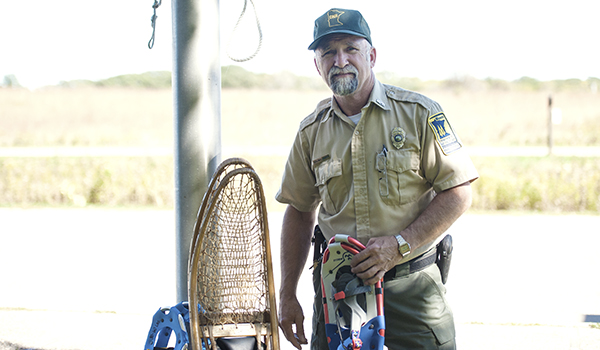 Myre-Big Island State Park Manager Gerald Katzenmeyer stands outside his office with the three types of snowshoes that are available to rent this winter. Katzenmeyer has been a park employee since 1978 and was promoted from assistant manager to his current position.

Photos and story by Micah Bader

Opportunities for exercise and fun abound in the winter months at Myre-Big Island State Park.

The park offers 1 1/2 miles of winter hiking trails, seven miles of snowmobile trails and snowshoeing throughout the park except on the five miles of cross country skiing trails.

Utilizing snowshoes is a great way to explore the park and get a workout in the winter, said Myre-Big Island State Park Manager Gerald Katzenmeyer, a park employee since 1978 who was promoted from assistant manager to his current position in 2009. 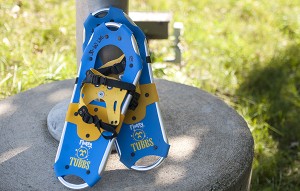 These neoprene Tubbs snowshoes with an aluminum frame are for children who weigh from 30 to 60 pounds.

“It might be a little chilly to get started, but you burn a lot of calories when you start clomping around in snowshoes,” he said.

Parkgoers who don’t have their own snowshoes can choose from three sizes and rent them from the park office for $6 a day, but Katzenmeyer said most people only use them for a few hours at a time.

“It’s not something you normally do all day,” he said. “If you’re not used to doing it, you’ll come back later a little stiff and sore.”

The park has 25 to 30 pairs of snowshoes available, and Katzenmeyer said he has never seen more than 10 pairs checked out at a time.

The purpose of snowshoes is to cause an even distribution of weight.

“It’s really nice when that snow is hard enough where you can go right over the top with snowshoes but you’d be falling through with regular shoes or boots,” he said. “It’s (about) the pounds per square inch.”

Along with adult-sized traditional wooden snowshoes with rawhide lacings that were World War II military surplus, the park offers two sizes of modern neoprene snowshoes with an aluminum frame for children. After choosing the right snowshoe, fine adjustments can be made by tightening or loosening the bindings.

“When I drive around and patrol in the morning, I’m getting paid to do what other people pay to do,” he said. “I might be looking at things slightly differently because I’m more on the maintenance and issues side, but it’s always nice to see a deer, a wood duck or a bunch of turkeys.”

“I think some people think when it gets cold they need to bundle up and stay inside,” she said. “But there’s nothing wrong with being outside in the winter. Public skates are fun with the family, and we see people skating for practice or fun.”

This winter, Davis said the department also plans to have women’s and coed volleyball leagues in addition to a dodgeball league.

“There are a lot of things for people to do in Albert Lea,” Davis said.