Where do the animals go when Humane Society is full? 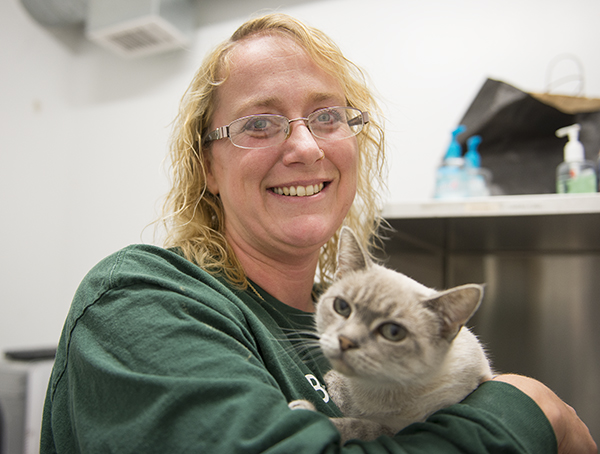 Christa DeBoer of the Humane Society of Freeborn County holds Baby Girl, a 13-year-old cat that was surrendered by an older owner who could no longer care for her. Baby Girl has since been adopted and will go to her new home soon. – Colleen Harrison/Albert Lea Tribune

There needs to be a discussion in Albert Lea about a possible need for more pet-friendly affordable housing, according to a local advocate.

“If you have an animal, no matter what circumstance you are in, you should be able to take your animal with you,” said Dee Amberg, program coordinator of the Unsocialized Stray Cat Initiative, an initiative that aims to sterilize as many cats as possible to reduce the number of unowned strays.

She mentioned the case of one woman who reportedly had to give up her cat about a week ago after having lost her home, living with disabilities and being unable to work.

“I hope now with this case it gives us something to think about,” Amberg said, “We have to think that while we have nice, warm, safe beds to sleep in, others don’t in our community and that it’s important for us to make sure that these people who have pets have somewhere to sleep as well, that they have the same kind of security we have.”

Cats removed from their owners are sometimes sent to the Humane Society of Freeborn County, which is currently full. 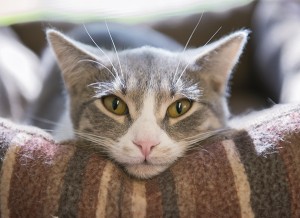 Tuesday is one of the cats currently at the Humane Society of Freeborn County. – Colleen Harrison/Albert Lea Tribune

“It’s unfortunate, but we have to tell them to try us in a week or two or find other spaces for the cat,” said Humane Society Director Christa DeBoer.

“They’re a constant form of company,” she said of the relationship of dogs and cats with their owners. “They are companionship. I talk to some people with anxiety, and the pet provides help for their anxiety. I think some of the elderly don’t have as many visitors or can’t get out much anymore, so that’s a constant contact they have.”

Humane Society leaders are looking for solutions to utilize their space they already have and providing solutions to the community to stop pet overpopulation, like spaying and neutering.

She said the removal of a pet from an owner can also have traumatizing effects on the pet.

“We always hope for a positive outcome, that the cat will re-adjust,” DeBoer said. “Some of these cats that are a little older don’t always adapt well to shelter life, which makes us sad. Anything someone could do to keep a cat with a family member or family friend will obviously be better than bringing them into the shelter.”

Space is usually tight for cats, DeBoer said, especially during the spring and summer months.