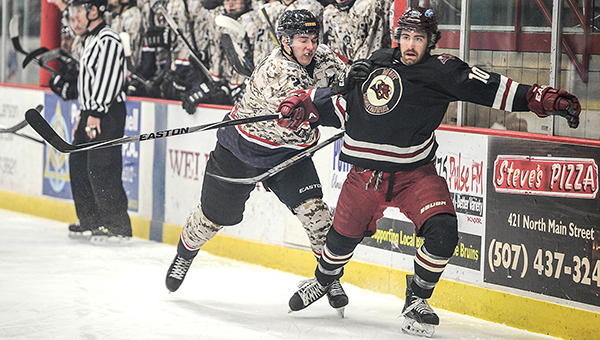 The Austin Bruins set the tone early and survived a physical push Friday by Minot to win 3-1 at Riverside Arena. 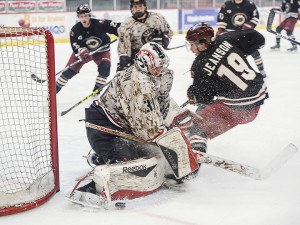 Austin took a 2-0 lead when Justin Misiak and Jade Miller each scored goals in the first two minutes and 15 seconds of the game, and Marcus Kalstrom scored his first goal of the season to make it 3-0 Bruins.

“It definitely helps when you’re playing on the attack instead of the defensive,” said Austin goalie Kristofer Carlson, who had 28 saves. “You want to set the tone at home, you want to give your fans a good time and you want to show a little energy out there.”

Austin controlled the game for the most part as both teams spent plenty of time in the penalty box. Austin was penalized 18 times for 66 minutes, and Minot was penalized 11 times for 41 minutes. The Bruins stopped nine of Minot’s 10 power play opportunities, including a five-on-three chance in the first period.

Bruins head coach Kyle Grabowski didn’t want his team to settle for getting pushed around against a physical Minotauros team, but he didn’t want them to get carried away either.

“You stick up for your teammates and you want to be team tough,” Grabowski said. “I’d like us to be a little bit more disciplined. I thought we reacted a little bit too much to some of the after whistle stuff. You don’t want to kill (power plays) 10 times in a hockey game, and that’s something that’ll have to be addressed for sure.”

Carlson made some big saves, but a lot of Minot’s looks were from outside. He said his defense kept things under control for him.

“The defense was unbelievable,” he said. “They battled, they blocked shots and we had to kill of a lot of penalties.”

With just three games on the season remaining against Minot, the Bruins will have to make those remaining matchups count. The Bruins have won their last three against Minot, after dropping their first contests against them.

“Every time we play them head to head is obviously a big deal,” Grabowski said. “Our division is hard enough to get points no matter who you play, but when you play the first-place team it’s time to take care of business.”