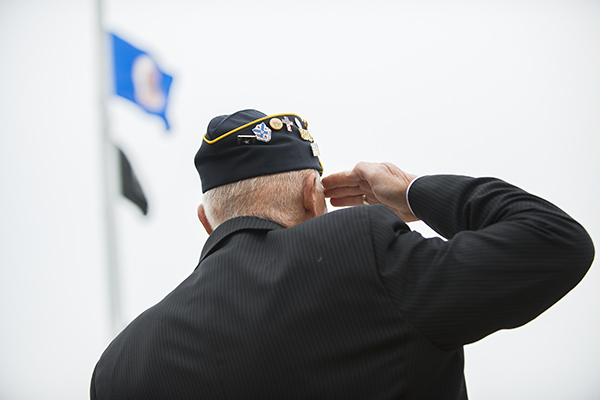 A veteran salutes as the U.S. flag is raised Wednesday morning during a Veterans Day ceremony in front of Freeborn County Courthouse. – Colleen Harrison/Albert Lea Tribune

“I for one want to say thank you, and I salute you all,” former Sen. Mike Parry said.

Parry’s remarks were made during his Veterans Day address to a crowd of more than 50 people, many of whom were veterans, in the commissioner’s room at the courthouse.

Parry, who lives in Waseca, described the significance and background of Veterans Day and his childhood in Albert Lea. 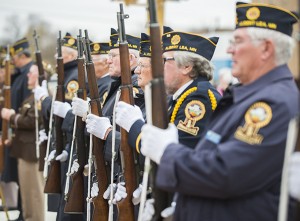 He said he gained a sense of pride in belonging to a family of soldiers willing to protect the country, and described his time as senator and his one-on-one time with veterans.

He read letters from sixth-grade students who described what they believed were the characteristics of a veteran.

An empty chair was shown during the program to signify those missing in action or prisoners of war.

The Careyaires sang several songs at the service, including “America the Beautiful,” “The Star-Spangled Banner” and “Military Medley.”

“Today’s the day to honor all veterans from all eras and all walks of life,” said Ron Reule, Freeborn County Veteran’s Services officer.

Prior to the ceremony, there was a raising of the colors, volley firing and taps played at the Freeborn County Veterans Memorial outside of the courthouse.

Marlene Wright was in attendance to honor the veterans and her husband Ethmer, a World War II veteran who died in October 2014.

“This was very important to him,” Wright said. “He would want me here. It’s an important event to honor veterans.”

A lunch was held at the American Legion following the program. 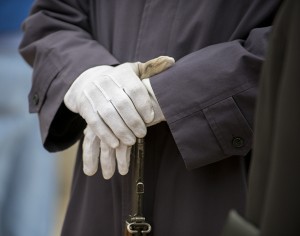 Wes Halverson, commander of American Legion Post 56, was pleased with the service.

“I think it went really well,” Halverson said.“We had a wonderful showing with all of the veterans who showed up.”