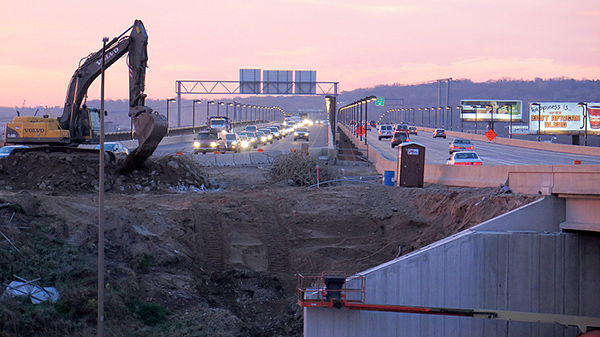 Traffic flows in both directions Tuesday over the new and redesigned Lafayette Freeway span over the Mississippi River. The four-year project replaced one of the state’s most worrisome bridges when the collapse of the Interstate 35W span renewed concern about the state’s bridges. – Tim Nelson/MPR News

When the Interstate 35W bridge in Minneapolis collapsed into the Mississippi in 2007, it killed 13 people and injured scores more. But the Lafayette bridge, east of downtown St. Paul, was actually considered in worse shape at the time.

The Highway 52 river crossing had suffered a 7-inch sag in 1975. Concrete was falling off it to the riverbank below.

“I know projects take a long time, but wow, this really took a long time,” Zelle remarked. “And it was well worth the wait. The fact that we actually kept traffic moving through the entire time is a tribute to good planning.”

The project radically realigned the north end of the crossing, routing Hwy. 52 under Interstate 94 to reach St. Paul’s East Seventh Street. The change also took out a tight curve that linked Hwy. 52 with westbound I-94. MnDOT says all traffic closures around the bridge have ended.

Tuesday’s observance marked a transportation milestone for Minnesota. The bridges that raised some of the gravest alarm after the I-35W collapse have all been replaced.

A little over a mile away, MnDOT said, traffic has now moved off I-35E’s Cayuga bridge, another of the worst-rated bridges, of the same vintage as the bridge in the I-35W disaster. The replacement of the Hastings High Bridge, another so-called fracture-critical span, opened two years ago this week.

It hasn’t been easy: the replacements helped fuel a bitter battle over transportation funding, and a rare override of a gubernatorial veto in the Legislature. But eight out of 10 of Minnesota’s most heavily traveled and structurally deficient bridges, as listed by the advocacy group Transportation for America, have now either been replaced or are under construction.

“It’s great as a state that we were able to focus on those that were the most in need,” Zelle said. “Having said that, we continue to look forward and see bridges to be an issue of concern. We are in much better shape than we were in 2007. But a state that has 10,000 lakes and 20,000 bridges, they’re always in a state of either renovation (or) replacement.”

St. Paul Mayor Chris Coleman made a case for one of those, even as he thanked MnDOT for repairing Lafayette. Engineers closed part of the Kellogg Boulevard bridge over Interstate Hwy. 94 last fall, citing a design error — not unlike the mistake that helped bring down the I-35W bridge.

“You know, we can’t just sit back and do one bridge or two bridges, and feel like we’ve done our job,” Coleman said. “There’s a lot of investment that still has to occur across the state.”

Zelle said MnDOT estimates the state will need another $4 billion in the next 10 years to keep up the system as it is, and $2 billion more to make the most basic upgrades.