BEREA, Ohio — Dropped from starter to third-stringer — without playing a game.

Johnny Manziel partied his way out of the lineup during Cleveland’s bye week.

Browns coach Mike Pettine benched the polarizing quarterback on Tuesday for his off-field behavior, a move that could signal Manziel’s days with the team are numbered. 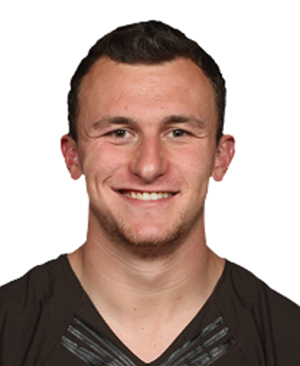 Pettine said Josh McCown will start Monday night’s game against Baltimore in place of Manziel, who was recently handed the starting job but couldn’t keep it while the team had a week off.

Manziel’s benching comes in the wake of a video surfacing of him holding a bottle of champagne and rapping profane lyrics last weekend in an Austin, Texas, nightclub.

He had promised not to bring any embarrassment to the team during its week off, and did just that and Pettine, who has been supportive of Manziel in the past, has had enough.

“Everyone in this organization wants what is best for Johnny just like we do for every player in our locker room. I’m especially disappointed in his actions and behavior because he has been working very hard,” Pettine said.

“The improvements from last year to this year have been tremendous, but he still has to consistently demonstrate that he has gained a good understanding of what it takes to be successful at the quarterback position on this level,” he said. “It goes well beyond the field.”

Manziel will not only move back behind McCown, but he’ll also be below Austin Davis on the depth chart.

Pettine met with Manziel following practice Tuesday and informed him of his choice to bench him for the foreseeable future. Pettine, whose job could be in jeopardy if the Browns (2-8) don’t demonstrate some progress the rest of this season, said owner Jimmy Haslam and general manager Ray Farmer support his decision.

The 22-year-old Manziel has developed on the field during his second NFL season.

However, despite saying he had learned from his past mistakes, Manziel, who spent 70 days during the offseason in a rehab facility specializing in alcohol and drug treatment, has not shown the maturity the Browns are looking for from their quarterback.

Before Tuesday’s practice, Pettine expressed both disappointment and frustration with Manziel, who passed for a career-high 372 yards in a recent loss to Pittsburgh. As he got ready to turn his players loose last week, Pettine spoke to Manziel about being responsible and was given assurances by the 2012 Heisman Trophy winner that he would behave.

Manziel didn’t make his plans known, but pledged that he would not become a distraction.

“I don’t think they’re going to have to worry about me this week,” he told reporters.

But it was hardly shocking when the video and photos appeared of Manziel, who entered the league with a reputation for enjoying his free time.

This time, though, the Browns weren’t so willing to excuse Manziel’s conduct.

Pettine said much of his displeasure in Manziel stemmed in him not seeming to understand that his behavior was a reflection on the team.

“You have a vision of what you want the team to look like, how you want them to handle themselves when they’re out of the building,” he said. “It’s not just pure football here, it’s truly player development on and off the field.”

“We always say to whom much is given, much is expected, and that’s true for all of our players,” he said.

McCown has finally recovered from a serious rib injury, which had initially vaulted Manziel into the starting lineup.

“My hope for him is, whatever those choices that he’s making, that they’re healthy choices and they’re good for him as a person,” McCown said. “When you’re in that room with somebody and spend as much time as we do together, there’s a connection there.”

Along with his penchant for partying, Manziel was recently investigated by the NFL for a domestic dispute. He was questioned by police in Avon, Ohio, after an in-car argument with his girlfriend.

The league announced on Nov. 17 that it did not find sufficient evidence that Manziel violated its personal conduct policy during the incident.

Still, it was another red flag for Manziel, who has made some positive steps, but just not enough of them.

“He’s done everything that’s asked as far as meetings and studying and trying to improve as a quarterback,” McCown said. “We’ve seen that. There are obviously things away from the facility that maybe people aren’t pleased with and maybe need to get cleaned up.

“It’s a work in progress. But I feel like I always see and believe the good in people. There’s some youth involved in some of the decision making that might not be the best, but I certainly don’t count him out by any stretch.”