Funeral services will be at 11 a.m. Saturday at Lake Hanska Lutheran Church in rural Hanska. The Rev. Sarah Taylor will officiate. Burial will follow in the church cemetery.

Visitation will be from 4 to 8 p.m. Friday at the Minnesota Valley Funeral Home south chapel in New Ulm and will continue for one hour prior to the time of service at the church on Saturday. To leave an online condolence for her family or to sign the guest book, go to www.mvfh.org. 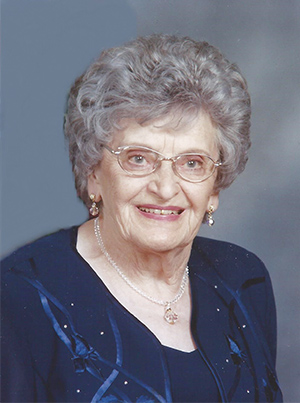 Lois Genevieve Sveum was born in Cambria on March 11, 1918, to Ole and Anna (Marsteen) Sveum.

As a young girl she moved to Virginia, St. Cloud and then to Minneapolis where she graduated from Edison High School in 1936. That same year her parents and brothers decided to buy a farm and move to Hanska.

She was united in marriage to Kenelm “Kay” Ahlness on July 16, 1938, at Lake Hanska Lutheran Church, where she had been a member since. Lois was active in the American Lutheran Church Women and taught Sunday school. She was a 4-H leader, a member of the Over 60 Club, County Home Extension Club, Sons of Norway and a 41-year member of the Hanska American Legion Auxiliary.

Lois and Kenelm enjoyed farming in rural Hanska until 1978, when they retired and moved to Hanska. She enjoyed gardening, the state fair and traveling but — most of all —her family gatherings and holiday celebrations.

It was when her health declined that she left her home in Hanska and moved to Ridgeway Assisted Living in New Ulm. As she needed more care, she moved to Oak Hills Living Center, where she spent the last two years. Her caretakers got to know her great sense of humor, and she was loved and taken care of dearly. Her personality and positive attitude were with her until the end.